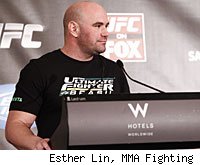 Last week hackers first went after UFC.com as a protest against the UFC's support for SOPA and PIPA, controversial legislation that would greatly expand the powers of the government to protect copyrights -- and prosecute those accused of violating copyrights. On Thursday, White challenged the hackers to "do it again, do it tonight." They did.

This time the hacking of the UFC's own site appeared to be more significant than what took place last week, when the UFC.com URL was simply redirected to a protest site. On Thursday night, the hackers appeared to gain access to files within the UFC's site. And now the hackers are also attacking White individually, rather than simply going after the web site.

The hackers also posted personal contact information for White as well as information from credit checks and background checks.

Through it all, White remained combative. When one person told White on Twitter that he had opened a credit card in White's name using White's personal information, White replied, "Go crazy with that f--ker." When someone else told White on Twitter to expect more trouble from the hackers, White answered, "That s--t don't work here dork."

The biggest question for the UFC is whether that s--t will work in disrupting the company's web site, where it sells pay-per-views and streams events. White seems unconcerned about hackers targeting him personally. If the hackers disrupt the UFC's business, however, that's a concern to UFC fans.