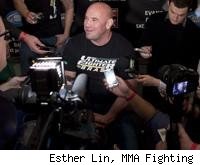 On the same day first baseman Prince Fielder finalized a nine-year deal with the Detroit Tigers worth $214 million, White says people should not be envious of Fielder's seemingly magnificent position.

"You don't want to be Prince Fielder over the next three years," White told reporters on Thursday. "When people know -- his life is going to be horrible. His whole life is going to change. He thought is was bad before? With the s--t he had going in his life? Everyone and their mother is coming after that 214."

Since the UFC is a privately-owned company, they are not required to make their numbers public. They have to report the fighter purses to the commission, but those numbers don't tell the actual story of a fighter's final earnings once bonuses and possible pay-per-view cuts are factored in.

White recalled meeting FOX executives for the first time and telling them how much fighters actually make. FOX executives were blown away and questioned why White wouldn't discuss the salaries in public for good press.

"The FOX guys were like, 'Holy s--t, these guys make this much money? Why don't you plaster this everywhere? This is the thing that will put you guys over the top. This is the thing people love to see and talk about and all.'"

As the saying goes, "Mo' money, mo' problems" and White is refusing to put fighters in a position where they could attract negative attention.

"I've had these conversations with Mike Tyson," White said. "Mike said when his money was reported, his f--kin' life was miserable. I'm not doing it. So just because you don't know everything. You don't have to know everything. And to be honest with you, it's not your f--kin' business. They're making a lot of money."