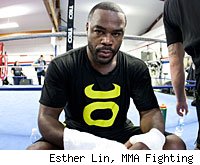 On the surface, that wouldn't seem to be a close comparison: Both were college wrestlers, but Evans was merely a pretty good wrestler at Michigan State. Davis was a great wrestler, winning the NCAA championship his senior year and coming in second, fifth and seventh in the nation in his other three years.

However, Evans insisted in interviews this week that he's a better wrestler than Davis, prompting a colorful exchange.

"Cocaine's a hell of a drug," Davis said when first told that Evans had claimed to be a better wrestler. "It's crazy what the kids do nowadays. I encourage imagination and it's good that he has that, but no. He'll never beat me in wrestling. Not thumb wrestling. Not anything of the sort."

Evans, however, insisted that Davis merely used his physical strength to win wrestling matches, while Evans had superior technique.

That prompted a brief exchange between the two, which UFC President Dana White ultimately ended:

Davis: "What have you been watching?"

Evans: "I watched you wrestle in college. It was trash."

The next question between Davis and Evans -- which one of them is the better fighter? -- will be answered on Saturday night.