To Get to Jon Jones, Rashad Evans Has to Beat Phil Davis and Greatest Foe: Bad Luck 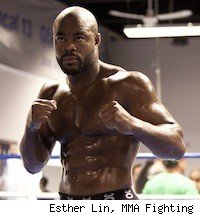 It's hard enough to win a fight at the highest levels of mixed martial arts. If that was Rashad Evans' only task, it would be plenty to think about. But like every other athlete on the UFC roster, Evans wants not only to win, but also to be the best fighter in his division. Unlike most athletes on the roster, though, it's a real possibility for Evans. But it will require peripheral vision; his eyes have to scan wider than what's in front of them on Saturday night.

First things first, of course. At UFC on FOX 2, he'll have his hands full with Phil Davis, an unbeaten hulk who has had 10 months to add weapons into his arsenal. Still, Evans is the favorite. And in order to accomplish his secondary goal of finally securing a title fight, it's not enough just to win; he'll also have to emerge unscathed.

If he only manages the former and not the latter, he will go at least two years since the moment he was first named No. 1 contender, with no title shot in sight.

Timing has undone all of Evans' last three bites at the apple.

First, Evans was knocked out of a March 2011 title shot due to an injured knee suffered in training. Then, he was to fight for the belt in August, but an injury sidelined his opponent, Jon Jones. And finally, an Evans' thumb injury torpedoed a proposed December championship encounter.

Now, Jones is saying he will be ready to fight in the spring, preferably at the April 21 UFC event in Atlanta. That would give Evans -- if victorious -- less than three months to rest and prepare. If he can't make that date, he's likely out of luck again, as UFC has Dan Henderson and his right hand of doom cocked and loaded. That would send Evans to the sidelines again, to wait for some other opportunity to open up, probably in the summer at earliest.

The situation leaves him with a small window, both for this specific title opportunity and for his career.

It was back in May of 2010 when Evans was first declared next in line to fight for the belt. At the time, it seemed like little was standing in his way. He was peaking. At 30 years old, he'd just dispatched Quinton "Rampage" Jackson, while Mauricio "Shogun" Rua had just KO'd Lyoto Machida to take the title. Jones had yet to sniff the division's top 10, and Evans seemed to have a clear path to fight for the belt.

But due to various circumstances, he's never gotten the chance to cash in his chip. He's now 32 years old, and while he hasn't yet shown any signs of slowing, most scientific studies suggest that male athletes peak between the ages of 27-30. That means that two of his best years were at best underused, and at worst, wasted.

Keep in mind that Evans has only fought one time in the last 18 months, a second-round TKO win over Tito Ortiz at UFC 133. Let's face it, that win, while impressive in its dominance, didn't tell us anything we didn't already know about Evans. For all of his importance as an MMA pioneer, Ortiz has been on a steady decline, with only a single victory in the last five years. Even if his losses have come against good opposition, they are still losses.

It was a fight that Evans had to win impressively, and he did so. But he didn't leave it without a hand injury, one that cost him a UFC 140 date with Jones. Davis may be green, but he's likely to be a much more competitive opponent for Evans than Ortiz was. He's younger, stronger and probably hungrier, as well.

So where does that leave Evans? Either he's going to have to fight in a conservative style, minimize risk of injury and edge out a win on points, or he can go for broke, look to finish Davis quickly and get out of dodge. Either way, there's no guarantee he'll finally get what he's long been promised.

Despite all the boos Evans routinely hears walking into arenas, there's no denying that he has publicly handled the situation well. Imagine what it would be like to be so close but so far repeatedly. The frustration of it all must be somewhere inside of him, but he refuses to let it out, even though it envelops his situation.

Just this week, he was asked about the possibility that with Jones' request to fight in April, he could be bypassed yet again, No. 1 contender at large, in perpetuity. His answer was quite diplomatic.

"Jon's the champion and right now he's on top of the world so I guess he gets to make those choices," he said. "I'm trying to get to where he's at. With that said, I don't own any spot. I've had the privilege to be said I'm the No. 1 contender a couple times, but I've still yet to fight for the belt. That said, if the UFC has another contender they want to put in there to make the show go on, then that's by all means what they have to do. But that does not stop what I'm going to do which is keep on winning. And eventually, no matter what, I will get that title shot."

It must seem like forever ago when everything was right in front of him. Everything probably seemed so easy then. But time has passed, and Evans knows that there are no easy routes to the top. As he's learned, becoming the champion is not just about winning, and luck hasn't exactly always been on his side.