Dana White Responds to Hackers: 'Do It Again, Do It Tonight' 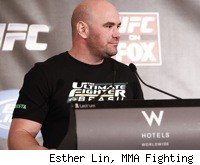 UFC president Dana White doesn't care that UFC.com was hacked on Sunday. In fact, he's urging the parties responsible to "do it again."

"Keep hacking our site," White said Thursday. "Do it again. Do it tonight."

Hackers on Sunday redirected the official UFC page to one of its own as a warning attack against the UFC for its support of the controversial SOPA anti-piracy bill.

Any downtime no matter how temporary is never good for business, but White's position is that he's in the fight business, not the website business.


More: UFC on FOX 2 Fight Card | UFC on FOX 2 Results
Since the majority of the UFC's revenues is from pay-per-view, the UFC has long held an aggressive anti-piracy act. SOPA would allow the government to stop advertising networks from accepting copyright-infringing websites as publishers. Additionally, search engines and Internet Service Providers would not be allowed to lead users to the infringing pages.

Opponents are calling SOPA a threat against the freedom of expression. Meanwhile, White says he is simply looking out for his business.

"Is SOPA the perfect bill?" White said. "No, it's not. The only thing that we're focused on is piracy. Piracy is stealing. If you walk into a store and steal a f--kin' gold watch, it's the same as stealing a pay-per-view. I don't care what your twisted, demented idea of stealing is."

A draft for the bill ended up getting postponed on Jan. 20, but White said Thursday that the hackers could actually help resurrect the bill.

"These guys look like terrorists now," said White, adding that hackers are only making government officials angry. " ... a bill that was about to die, it's about to come back."

The hacking was a web address redirect and the UFC says no confidential information belonging to the company or customers were compromised during the attack.

White made it a point that he loves the Internet, but for him, the Internet is also a camping ground for a select group of individuals he's not particularly fond of.