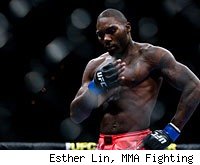 CHICAGO -- UFC President Dana White confirmed on Thursday that Anthony Johnson has been released from the UFC and won't be welcome back until he can prove that he has put his weight problems behind him. But White wasn't quite so adamant that another fighter he released, Nate Marquardt, wouldn't be welcome to return to the Octagon.

With Johnson, White said missing weight by 11 pounds at UFC 142 made it clear that he doesn't belong in the UFC. White also specifically ruled out the possibility of Johnson fighting for Strikeforce, and said that Johnson needs to go to another promotion, make weight and win fights before the UFC would consider giving him another chance.

More: UFC on FOX 2 Fight Card | UFC on FOX 2 Results
"He needs to go fight somewhere else, get some wins, come in on weight," White said of Johnson. "He needs to prove to me that he can be a professional, show up on weight and do the things he needs to do. If he does, we can talk."

When asked about Marquardt, however, White sounded open to the possibility that he could re-sign with the UFC. Marquardt last fought at UFC 128 in March, defeating Dan Miller, but was cut by the UFC after his testosterone replacement therapy resulted in a high testosterone count, causing the Pennsylvania State Athletic Commission to cancel his fight. White was furious at the time, but several months later he sounds willing to forgive and forget.

"I don't dislike Nate," White said. "I like Nate very much. We'll see what happens."

Marquardt and Johnson were originally scheduled to fight each other in the main event of the UFC on Versus card in August, before Johnson pulled out with an injury and before Marquardt ran into his trouble with the Pennsylvania Commission. Both fighters are now free agents, which means that if another promotion wants to sign them, it could book a fight worthy of being a UFC main event.

But if one of those free agents signs with the UFC this year, it sounds like it's going to be Marquardt. White may eventually forgive and forget with Johnson, but that won't happen any time soon.