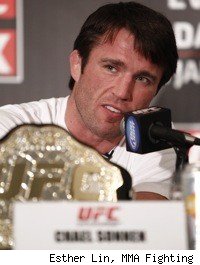 Although the UFC (as well as the rest of the world) recognizes Anderson Silva as the world middleweight champion, that's not stopping contender Chael Sonnen from walking around with his own replica belt.

A day after wearing the belt over his shoulder for an ESPN2 interview, Sonnen brought the belt to Thursday's UFC on FOX 2 press conference for everyone to take a closer look at the W Chicago City Center in Chicago.

"This is the world championship title of which I took from Anderson Silva," Sonnen explained of the belt in front of him. "In this country, possession is nine-tenths of the law. Finders keepers, losers weepers, and if he wants it back, he knows where to find me."

More: UFC on FOX 2 Fight Card | UFC on FOX 2 Results
If Sonnen wants the real title, he'll have to beat Michael Bisping on Saturday to earn a title shot against Silva. To make matters confusing, Sonnen for the past month-and-a-half has insisted a rematch with Silva will not happen, claiming he's done chasing after a rematch with Silva. Instead, Sonnen said he would cash in his No. 1 contender voucher against a champion in another weight class.

On Thursday, White cleared up the situation, reiterating that the winner of Sonnen-Bisping will take on Silva for the belt in the summer.

"Chael's nuts," White said. "He says all kinds of crazy things. He's [claims he's] champion ... Listen to me. Okay? Listen to me. He's not the champion. He will fight Anderson Silva if he wins. He will not fight for the heavyweight championship or Jon Bones Jones."

Interestingly, Sonnen has strayed from trashing Bisping or previous opponent Mark Munoz leading up to UFC on FOX 2, instead sticking to cutting pro wrestling promos about emerging victorious on Saturday. It's clear as focused as Sonnen is on Bisping, there's still business to be settled between himself and Silva.

"I believe that I am the true champion," Sonnen said. "This is the true UFC belt. This was Anderson Silva's belt. I took his belt like a gangster in the night ... If he wants his belt back, he can come and get it. But as far as I'm concerned, he's as irrelevant as Mike Tyson. The only thing he hasn't done is announce his retirement. He sound paint his face, gain a hundred pounds, sit in the third row and hope somebody remembers who they are because neither of those guys matter anymore."