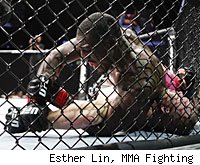 Will Rashad Evans finally earn the shot at the light heavyweight title that has been evading him for the last two years? Or will Phil Davis pull off the biggest win of his career? Will Chael Sonnen earn the rematch with Anderson Silva he so desperately wants? Or is Michael Bisping going to become the No. 1 contender in the middleweight division? Can Chris Weidman take a big step forward on by far the biggest stage of his career? Or will Demian Maia's jiu jitsu be too much for Weidman to handle?

I'll attempt to answer those questions as I pick the winners of UFC on Fox 2 below.

Rashad Evans vs. Phil Davis
What makes this fight so dangerous for Evans is that the methods he's used to win his last three fights (against Tito Ortiz, Rampage Jackson and Thiago Silva) aren't likely to be effective against Davis. Davis is more naturally talented than Evans, he was a better college wrestler than Evans, he's bigger than Evans and stronger than Evans, and I think Davis will come out on top if Evans attempts to clinch with him and take him down.

So then it becomes a question of whether the more experienced Evans can fight a smarter fight than Davis, pick his spots standing and change levels to keep Davis guessing. Evans has much more experience fighting high-level opponents than Davis does, and if Evans can take Davis out of his comfort zone, he'll be able to frustrate him.

I'm tempted to pick Davis to pull off the upset, but I think Evans is crafty enough to find a way to beat Davis, probably by decision in a fight that stays mostly standing. With the win, Evans will finally get a shot at Jon Jones and his light heavyweight title.
Pick: Evans

Michael Bisping vs. Chael Sonnen
The battle for the right to face middleweight champion Anderson Silva is an easy fight for the UFC to hype this week because Bisping and Silva are such natural trash talkers. Unfortunately, I don't see it as being a particularly competitive fight once the Octagon door closes. Sonnen is just on another level than Bisping at this point in his career, and it will be shocking if Sonnen doesn't take Bisping down and beat him up on the ground. A Sonnen-Silva rematch is the huge money fight the UFC wants to book, and after Sonnen whips Bisping, it's a fight that a whole lot of FOX viewers will be willing to buy on pay-per-view.
Pick: Sonnen

Demian Maia vs. Chris Weidman
Weidman agreed to take the biggest fight of his life on very short notice last week when this card was re-shuffled because of Mark Munoz's injury. I was surprised when the betting odds came out for this one and Weidman was labeled the favorite, because I think Maia's world-class Brazilian jiu jitsu skills are going to make this a very tough fight for Weidman to win. Weidman was a good college wrestler who has built up a 7-0 record in MMA, but Maia is on another level, and I expect this fight to end with Weidman tapping.
Pick: Maia.

Evan Dunham vs. Nik Lentz
Lentz needs a win after looking surprisingly bad in a loss to Mark Bocek at UFC 140, and I think he's going to get it against Dunham. Lentz is the better wrestler in this fight and should be able to take Dunham down and stay on top of him, and I don't think Dunham is good enough off his back to do much about it. Look for Lentz to win a decision.
Pick: Lentz

Mike Russow vs. John-Olav Einemo
Russow, a Chicago cop, should have a great home crowd on his side at the United Center. But the crowd won't be enough to carry him through a tough battle with Einemo. Russow hasn't fought in almost a year, and ring rust and conditioning could be issues, and Einemo is such a high-level grappler that I expect him to submit Russow.
Pick: Einemo

Johnny Bedford vs. Mitch Gagnon
Fresh off a one-sided win over Louis Gaudinot at the Ultimate Fighter Finale, Bedford draws the Canadian Gagnon, a UFC newcomer. Gagnon is 8-1 with all eight wins coming by submission, so he could be a threat to Beford on the ground, but Bedford is bigger, much more experienced and a better striker and should take this one.
Pick: Bedford

Cub Swanson vs. George Roop
Roop is coming off a tough split decision loss to Hatsu Hioki in a fight where a win would have done big things for his career. I see him bouncing back and out-striking Swanson on his way to a decision victory.
Pick: Roop

Charles Oliveira vs. Eric Wisely
The 22-year-old Oliveira entered the UFC as a very hot 12-0 prospect and then won his first two fights inside the Octagon, and it looked like just a matter of time before he was in title contention. Unfortunately, Oliveira has two bad losses and an unfortunate no contest in his last three fights. Now the UFC is wisely giving Oliveira a step down against Wisely, a UFC newcomer. Oliveira may not be able to finish Wisely, who has never been stopped in 25 pro fights, but he should win a decision.
Pick: Oliveira

Michael Johnson vs. Shane Roller
Johnson, the former Ultimate Fighter finalist, is a good athlete and strong wrestler who sometimes relies too much on playing a top control game, as he did when he got submitted by Paul Sass in his last fight. But against Roller I like Johnson's chances of getting the better of the striking exchanges and winning a decision.
Pick: Johnson

Joey Beltran vs. Lavar Johnson
This heavyweight fight should be a fun slugfest for fans who are willing to forgive a lack of technique if they get lots of sloppy brawling. Beltran and Johnson are both big guys who hit hard, and the question is going to be who connects with a fight-changing punch first. I think it'll be Johnson.
Pick: Johnson

Chris Camozzi vs. Dustin Jacoby
Camozzi appeared on the 11th season of The Ultimate Fighter and has been a middling UFC competitor since then, going 2-2 inside the Octagon. Jacoby lost his UFC debut in October and will probably lose his spot on the UFC roster after this one.
Pick: Camozzi