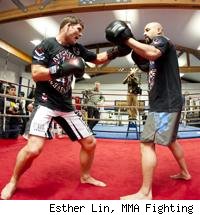 CHICAGO -- The UFC arrived in town Wednesday, settling down in the south side of the city inside a hearty, no-frills boxing gym to kick off the UFC on FOX 2 fight week festivities leading up to Saturday's event at the United Center.

Gathering inside a muggy room with two boxing rings inside the Chicago Boxing Club gym, Rashad Evans, Phil Davis and the main attractions took turns working out for the media.

The main event on Saturday features two lively personalities in Evans and Davis and much has been made of their willingness to embrace in pre-fight verbal sparring sessions. However, three days removed from their light heavyweight tilt, the two appeared to be in a different mind frame. Perhaps they were saving their material for Thursday's official press conference or the two were simply eager to fight. But gone from the former champion Evans' demeanor on Wednesday was his energetic playfulness prominent at last month's press conference that landed him in hot water.

Instead, Evans completed his shadowboxing and padwork without a hint of a smile. Evans turned on a friendly attitude once he began speaking to the press but even then the Chicago resident was mostly soft-spoken.

Davis, a slight underdog heading into the fight, presented himself as a confident competitor and sounded as self-assured as ever. The unbeaten 27-year-old spoke about benefiting from his lengthy layoff by having greatly improved in his MMA fundamentals.

"He might have outstruck me a year ago," Davis said. "I don't know if that's going to happen on Saturday."

Evans acknowledged the likelihood of seeing an improved Davis, but insisted he already understands the basics of Davis' movement and cadence inside the cage.

Former middleweight title challenger Chael Sonnen chose to handle the media interviews prior to working out, welcoming a discussion with reporters on everything from his fight against Michael Bisping to his political stance to possibly voting for Brian Stann as a write-in candidate.

Sonnen shrugged off the challenges of having initially prepared for Mark Munoz, stating he doesn't believe in things such as a "gameplan" anyway. And contrary to what the UFC is saying, Sonnen also reiterated his belief that a rematch against champion Anderson Silva won't materialize even if Sonnen emerges victorious Saturday.

"The title shot is not going to happen, I'm all for the marketing, I'll get behind it as much as the UFC wants to, but that's not going to happen." Sonnen said. "I'd rather go to Brazil, maybe Vitor [Belfort] or somebody else .... But Silva is not getting in there with me."

The strength of British middleweight contender Bisping lies in his effective boxing and he spent his entire workout primarily on his striking with trainer Tiki Ghosn on the mitts.

Embracing this grand opportunity, Weidman was in such positive spirits that you wouldn't have guessed he's in the process of a difficult weight cut. His camp admits the one-week notice has been challenging on their preparations but assures Weidman will be on target come Friday's weigh-in.

Following the workouts, former WEC champ Miguel Torres and UFC on FOX 2 competitor Mike Russow spoke with teens about the importance of staying focused and avoiding the temptations of drugs and alcohol. After the brief talk, Torres guided the teens through boxing drills.