UFC Planning July 7 Event in Las Vegas, To Include Next Fan Expo 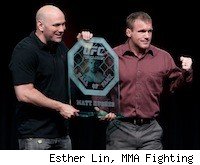 The UFC's annual Fourth of July weekend event will return to its usual home in Las Vegas, MMA Fighting has learned.

The event will also host the first UFC Fan Expo of 2012.

The event, currently unnamed due to the UFC's still evolving schedule but possibly numbered UFC 148, will take place on July 7, likely at MGM Grand Garden Arena, according to sources.

The Fan Expo, meanwhile, is slated for the Mandalay Bay Convention Center on July 6-7.

The last Fan Expo took place in Houston last October, in conjunction with UFC 136, and nearly 25,000 fans were estimated to attend the two-day event, which offers photo opportunities, autographs sessions and training sessions. Past events have also featured Hall of Fame induction ceremonies.

The Fourth of July show is historically one of the biggest outings of the year for the promotion, which has hosted the holiday weekend event at its home base of Las Vegas for each of the past four years. The last time it wasn't in Sin City was back in 2007, when the event was held at Arco Arena in Sacramento, California.