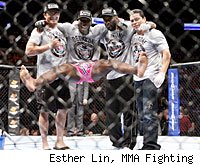 CHICAGO -- Three days out from his main event battle with Rashad Evans on Saturday night, Phil Davis was brimming with confidence. And not just about how he matches up with Evans.

In addition to explaining why he thinks he's going to come out on top against Evans, Davis also said he believes that he would beat the man at the top of the light heavyweight division, Jon Jones.

"I think a fight with me and Jon would go like any other fight I've had," Davis said.

When I asked him if that meant he would win, Davis answered, "I am undefeated."

Davis said he's aware that Jones has said publicly that he's expecting Evans to win on Saturday night, and therefore earn a title shot. But Davis said he's not particularly concerned about Jones's opinions, and that he expects to show on Saturday night that he's the most worthy future opponent to Jones, who has looked practically unbeatable in running through the UFC light heavyweight division.

As for Saturday's fight with Evans, Davis noted that his own credentials as an NCAA champion at Penn State dwarf the wrestling accomplishments of Evans at Michigan State, and he said he expects to be the one who's in control throughout their fight on Saturday night.

"I'm the man who determines what happens," Davis said.

Davis hasn't fought since his unanimous decision victory over Antonio Rogerio Nogueira in March, and he said he has improved so much in the gym since then that Evans will be seeing a completely different fighter.

In addition to that wrestling advantage, Davis said he believes his time in the gym has made him a better stand-up fighter than he was when he faced Nogueira.

"He might have out-struck me a year ago," Davis said. "I'm planning on him not being able to stop a lot of the things I do well. ... My game has come a long way since my fight with Nogueira, and I'm anxious for people to see how far I've come since my time off."

If Davis has come far enough that he can beat Evans, then Jones might be next.