Nate Diaz vs. Jim Miller Set for UFC on FOX 3 on May 5 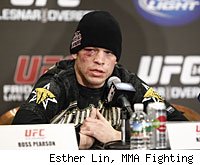 A lightweight fight that could earn the winner a shot at the championship has been added to the May 5 UFC on FOX event in New Jersey.

UFC President Dana White announced that Nate Diaz will fight Jim Miller on that fight card, making it the first fight announced for the main card to be shown on the FOX network.

Miller is coming off a very impressive first-round submission win over Melvin Guillard in the main event of Friday night's UFC on FX show. The UFC was clearly eager to get Miller back inside the Octagon quickly after that. Diaz is on a two-fight winning streak, having beaten Takanori Gomi and Donald Cerrone in back-to-back fights since moving back down to lightweight after previously fighting at welterweight.

The winner of the Diaz-Miller fight will have a very good case to make that he deserves to be the No. 1 contender in the lightweight division. Diaz and Miller are two of the best 155-pounders who haven't yet received a shot at the lightweight title.

UFC lightweight champion Frankie Edgar will face Ben Henderson in February at UFC 144, but beyond that the UFC lightweight title picture is murky. None of the top lightweight title contenders are riding winning streaks of longer than a couple of fights, so whoever wins between Diaz and Miller may be next in line.