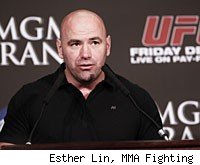 For a company that's adopted an aggressive stance toward fighting online piracy of its pay-per-view events and other content, the UFC seems relatively unconcerned about its website getting hacked over the weekend.

After UFC.com was hijacked and briefly redirected to a site called UGNazi.com -- supposedly in retaliation for the UFC's support of the anti-internet piracy bill SOPA (Stop Online Piracy Act) -- the UFC released a statement yesterday to assure fans that any information they might have given to the organization via its site was safe.

"On Sunday, January 22nd, the UFC.com website was redirected by a criminal hacker to another website," a statement provided to MMA Fighting read. "The UFC website was quickly restored to the control of the UFC, and there is no evidence suggesting that any confidential information belonging to the company or its customers was compromised by the re-direction of the website. UFC representatives are continuing to investigate the matter and are working with law enforcement agents to prosecute those involved."

That response, however, stands in stark contrast to the initial take offered by UFC president Dana White on Twitter.

"I'm in the fight biz not the website biz," he wrote to one fan who asked him about the hack on Sunday. "Who gives a [expletive]!?"

One answer might be: fans who have given the UFC their credit card information at some point in the past. Between online pay-per-view purchases, merchandise, and UFC Fight Club subscriptions, thousands of fans have no doubt passed important confidential information to the UFC through one of its websites, and those people might have liked a little extra reassurance from the public face of the company.

By comparison, after online shoe retailer Zappos.com was hacked earlier this month and the information for a reported 24 million accounts exposed, the company quickly sent out an email to customers to alert them to the situation and advise them to change their login and password information on any other site where they used "a same or similar password." Zappos also reassured customers that the "database that stores your critical credit card and other payment data was NOT affected or accessed."

The UFC's website was quickly restored by late Sunday afternoon for most visitors, but the group that claimed responsibility for hacking both UFC.com as well as Coach.com and CoachFactory.com -- all for their support of SOPA -- posted a message to its website that read simply: "We arn't done...not even close."

The timing of the attack coincided with a pro-SOPA opinion piece in the Las Vegas Review-Journal written by UFC executive vice president and general counsel Lawrence Epstein which accused "[f]oreign criminal websites," such as those that offer illegal streams of UFC events, of costing "legitimate U.S. businesses more than $200 billion a year, siphoning off American jobs, hurting businesses and dampening our economy."

Regardless, the SOPA bill remained unpopular with major online entities such as Wikipedia and Google, both of which participated in protests of the SOPA and PIPA (Protect Intellectual Property Act) bills last week before both were eventually shelved by lawmakers.