Think Michael Bisping Isn't Ready for a Title Shot? He Begs to Differ 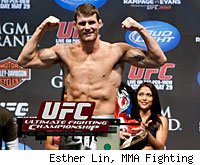 Michael Bisping hadn't yet gotten his heart rate down and his breathing back to normal following his TKO win over Jason "Mayhem" Miller and already UFC president Dana White was in his face, trying to talk him into another fight.

"[White] asked me immediately after the fight, 'Do you want to fight on the FOX card on January 28?'" said Bisping. "I thought, fighting on FOX right now is a bigger deal than anything else. You can't get any higher than that."

He also thought, up until last week, that he'd be fighting jiu-jitsu specialist Demian Maia, and that he might have at least one more fight after that before he'd have a realistic chance at a title shot. Now, thanks to an injury to Mark Munoz, all that has changed. The question is, has it changed for the better or the worse?

Judging by the stakes of the fight alone, you'd have to say that Bisping's lot has improved significantly. Before the switcheroo on the UFC on FOX 2 card, he was fully prepared to wait in line behind the winner of the Chael Sonnen-Munoz fight in order to get a crack at UFC gold. He was also prepared to take another fight in the meantime, he said, since more fights mean more paychecks.

"I want a title, but also I want to keep fighting because I want to earn money," he explained. "That's why I do this, first and foremost. I do this for money. [People say], 'I do this to challenge myself,' and all this other crap; that's bulls--t. I do this for money. I do this to give my family a certain lifestyle. And yes, I want to be champion, I want to be the best. That's the next thing. But ultimately I want to put money in the bank and provide for my children's future, and that's how I do it is fighting. I'm not going to do it sitting around waiting for a title shot."

As it turned out, all he had to do was wait around for a phone call. While eating lunch following a training session last week, he said, he got a call from White, who explained that Munoz was out and he could be in -- if he wanted to be.

"He said if I win I'm fighting Anderson Silva in a soccer stadium in Brazil in the summer. It's too big of an opportunity to turn down. I've trained my whole life for this moment, so of course, I didn't hesitate."

But if you believe oddsmakers, Bisping now finds himself in a much tougher fight. Most bookmakers favor Sonnen in the fight by a nearly 5-1 margin, making Bisping by far the heaviest underdog on the network TV portion of the card. The fight against Maia seemed difficult, though certainly winnable. The fight against Sonnen, at least according to most experts, is a real longshot for the British middleweight.

Part of that, it seems, is a problem of perception. To many fight fans -- and even to Sonnen, if you can ever take what he says at face value -- Bisping is a fighter who wins, but who has yet to prove himself against opponents who matter.

"He certainly hasn't beaten anybody that's any good, rankings-wise," Sonnen explained when I spoke to him last week.

In other words, he just doesn't seem like a legitimate title challenger to many outside observers, and so they have a hard time imagining him in the same cage with someone like Anderson Silva. But according to Bisping, that's where perception doesn't line up with reality.

"I've been in the UFC since 2006," he said. "That's six years, and I've been consistently facing the best opponents out there. If you look at my record, it's a who's who of mixed martial arts, to be honest, and I've done very well."

Take, for instance, his current four-fight win streak, which includes victories over Dan Miller, Yoshihiro Akiyama, and "Mayhem" Miller. Maybe it's not a path of fire through number one contenders, but it is a list of solid wins against guys who matter. Perhaps more importantly, look at his losses.

As Bisping is quick to point out: "I've only ever been stopped once in my career, and I've got two very, very debatable decision [losses]."

Detractors would point out that he also has at least one debatable decision win over Matt Hamill, but it's still a point worth considering. These days there's no shame in getting knocked out by the likes of Dan Henderson, and there's no reason for a middleweight contender to feel bad about a split decision against former UFC light heavyweight champ Rashad Evans, either.

It's enough to make you wonder, is Bisping better than he gets credit for from American fans? Just because some people can't imagine him beating a superior wrestler like Sonnen and coming face to face with Silva in a soccer stadium, does that actually mean anything?

"Chael Sonnen had his shot," said Bisping. "He blew it. Who else is there?"

If he can find away to prove the oddsmakers and the critics wrong and get his hand raised in Chicago on Saturday night, he'll have his answer. So will fight fans everywhere, whether they like it or not.