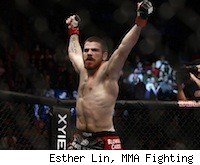 For Jim Miller, Friday night was another impressive performance against an opponent on the fringe of the division's top 10. The next thing he needs is a breakthrough win against a truly elite opponent. Overall, Miller's resume is outstanding. He's a finisher, with 15 stoppage victories in 21 career wins. His only three losses have come to Frank Edgar, Gray Maynard and Ben Henderson -- a UFC champ, and two No. 1 contenders, respectively.

Now, it's time for Miller to get over the hump. At least mentally, he's there. After beating Melvin Guillard at last Friday night's UFC on FX 1, he said that he believes he's the "most dangerous lightweight in the world."

His aggressive, hard-charging attitude is proof of that self-confidence, even if he's struggled at times against the best 155 has to offer. The same can't be said for Guillard, who has now lost two in a row and seems to panic whenever he hits the ground against a submission threat.

All six of Guillard's UFC losses have come by way of choke submission -- three rear naked chokes, two guillotines and one triangle, if you're scoring at home. After recently moving his training camp to Florida, he has a new jiu-jitsu coach. Guillard is now 28 years. He's not so young anymore, so he'd be wise to take some time off and work intensively on his ground game. If he doesn't shore up that problem, he's destined to be what he's always been, a million-dollar standup fighter with a 50-dollar ground game. That might sound a bit harsh, but Guillard's tapped out nine times in 42 career fights, an unacceptable ratio for a top-level fighter.

Jim Miller
Realistically, there aren't many names in front of Miller on the UFC depth chart. The two most notable -- Edgar and Henderson -- are locked into a fight, and Miller's not quite in position to challenge for the belt just yet anyway. That leaves only a few likely matchups. We only have to go back a few weeks ago to find a fellow lightweight that has worked his way into the title picture. He's on a similar timeline so the duo should be ready to fight around the same time, and the fight makes sense when you look at where they stand within the division.
Prediction: Miller faces Nate Diaz

Melvin Guillard
The best thing Guillard could do is take time to work on his shortcomings. Work in a gi. Go to Brazil. Treat it like an illness in need of a cure, and go wherever the remedy is. Guillard has been an incredibly active fighter during his recent UFC career. Since December 2007, he's fought 12 times -- once every four months or so. While that's been great for his bank account, perhaps it would have benefited him to take longer stretches between fights to address overall development. It's hard to criticize Guillard so much when he rattled off wins in eight of nine prior to his recent skid, but it would be a bigger shame to fail to capitalize on all of his potential.
Prediction: The UFC puts him in a fight with another striker, say, Sam Stout

Josh Neer
Did you know that Neer is younger than the "Young Assassin," Guillard? Perhaps it's because Neer has been around for almost nine years, but the veteran strikes me as someone who's a bit older. Neer showed that poise in his win over Duane Ludwig, weathering an early storm to take the fight into his world and winning by submission. That makes it five straight wins for Neer, who voiced an interest in a fight with Brian Ebersole afterward. That's a good matchup, but I have another idea.
Prediction: Neer faces Mike Pyle

Mike Easton
Easton certainly brings with him a palpable energy and a strong presence. Now 2-0 in the UFC octagon after a spirited fight with Jared Papazian that should have earned the Fight of the Night award, he hasn't yet faced anyone that fans find recognizable, so it may be time to throw a bigger name at the "Hulk."
Prediction: He faces Yves Jabouin

Pat Barry
Beating Christian Morecraft may not be a signature win for Barry, but it was important in that it showed he could survive a sustained ground attack. Similar to Guillard, Barry has shown brilliant standup but folded when the fight went to the mat. That came to an end on Saturday, when he withstood a choke and an arm bar to return to his feet and KO Morecraft. While we can't write him into the heavyweight title picture, at least it's a positive sign of evolution. Working with the DeathClutch grapplers, he should continue to improve. That's a good thing, because it won't get any easier for him.
Prediction: He faces Gabriel Gonzaga

Khabib Nurmagomedov
The 23-year-old Russian moved to a perfect 17-0 with a third-round submission win over Kamal Shalorus. Most impressive was the fact that Nurmagomedov outwrestled an excellent wrestler. His striking can best be characterized as unconventional. Against Shalorus it was effective, as he out-landed his opponent 59-18. Given his age, Nurmagomedov has time to improve. His next fight should come against someone of similar UFC experience.
Prediction: He faces John Cholish

Charlie Brenneman
Brenneman scored another grinding victory, keeping the fight on the mat for most of the contest and working Daniel Roberts over throughout the duration. Brenneman's next bout should come against another strong wrestler, perhaps forcing him into a fight that will see how far his striking has come along.
Prediction: He faces Dong Hyun Kim