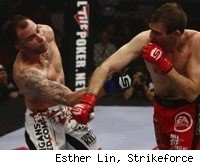 Both fighters have verbally agreed to the bout, sources with knowledge of the situation confirmed.

Couture (3-1) is coming off a majority decision win over Maka Watson at a September Challengers series event. That victory followed the first loss of his pro career.

In accepting the bout with Heun, Couture will face the most experienced opponent he's yet to encounter. Heun (9-4) snapped a two-fight losing streak with a unanimous decision victory over Magno Almeida last June, but hasn't fought since then. In that bout, he suffered an elbow injury that sidelined him.

Strikeforce: Tate vs. Rousey takes place at Nationwide Arena in Columbus, Ohio. As the name implies, the headlining bout will be a women's bantamweight title fight with champ Miesha Tate looking to defend against unbeaten Ronda Rousey. Other confirmed bouts include Paul Daley vs. Kazuo Misaki, Josh Thomson vs. KJ Noons and Sarah Kaufman vs. Alexis Davis.