Mo Lawal Won't Appeal Positive Test for Steroids, but Will File an 'Answer' 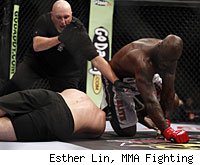 Former Strikeforce light heavyweight champ "King" Mo Lawal likely won't appeal a positive steroid test following his win over Lorenz Larkin at a Strikeforce event in Las Vegas earlier this month, the fighter and his manager, Mike Kogan, told Ariel Helwani on Monday's edition of The MMA Hour. Neither will they admit that Lawal knowingly or willfully ingested the steroid Drostanolone, however.

Instead of pleading innocent or guilty to the charges, it appears the Lawal camp will plead ignorance, blaming an over-the-counter supplement.

"Since we're not contesting the findings of the commission test, we're not challenging the chain of custody, we're not pointing fingers at anybody and we're not calling for conspiracy theories, I don't believe we'll actually file an appeal per se," Kogan told Helwani. "What we will file is an answer, and an answer would involve affirming their test results and providing our findings and our explanation."

The guilty party, according to Kogan and Lawal, is a supplement called S-Mass Lean Gainer by Rock Solid, which Lawal said he bought at a Max Muscle store in California and used only sporadically for "rehab stuff," the fighter explained. It was recommended to him by a Max Muscle employee some time in April of 2010, he said, though it's since been removed from the market, according to Kogan, who admitted he had no knowledge that Lawal was taking any supplements at all prior to his positive drug screening.

"To the best of my research, this product was taken off the shelves some time in mid-2011, for exactly the same reason that we're facing right now. Its primary and only relevant ingredient of that particular product is a substance known as Methyldrostanolone, which is basically just a pill format of Drostanolone," Kogan said.

Lawal insisted he'd "never even heard of [Drostanolone]," and was first alerted that he'd tested positive for it when reporters began calling him with the news handed down by the Nevada State Athletic Commission. Lawal insisted he'd never knowingly taken any illegal performance-enhancing substances at any point in his athletic career, and touted his long history of clean tests in collegiate and international wrestling competitions.

At the same time, Lawal admitted that he didn't research the supplement before taking it, even though he was well aware of instances where over-the-counter workout aids had resulted in positive drug tests for other athletes.

"When I went to Max Muscle, I figured you can't buy steroids at a Max Muscle. It's a chain store," he said. "That's like going to a grocery store and buying something illegal there. ...I guess that's the mistake I made. When I looked at the bottle, it just had a bunch of numbers on it. It had the ingredients. I didn't see anything that looked illegal on the bottle, to be honest with you."

And yet, as athletic commissions love to remind fighters -- and as Kogan and Lawal both admitted -- the athlete bears the ultimate responsibility for what goes into his system. As Helwani pointed out, even a quick Google search on the product reveals web sites that describe it as "the most powerful designer anabolic ever created," and suggests that consumers "conduct all the necessary research that comes with using a designer anabolic of this nature."

Still, Kogan appeared eager to turn the conversation into a referendum on "the supplement industry," which he said "knowingly, intentionally, and maliciously misguides, hides, mislabels, and resynthesizes and does all kinds of tricks to try to keep selling you the product that they themselves know is illegal."

That argument will be part of Lawal's "answer" when he appears in front of the NSAC, Kogan said, where he'll likely make more of an attempt to explain his positive test rather than refute it.

"Our primary focus with the commission and the Attorney General's office is intent," Kogan said. "We had no intent of taking any illegal substance and we believe we have enough evidence and enough character references to make that point very clear."

As for whether that explanation will satisfy fans, Lawal declined to speculate, but he did say that he would only take Nature Made supplements from now on.

Somewhat ironically, Kogan suggested that fans resist forming an opinion on the matter until they'd done all the research -- exactly what Kogan and Lawal admit they did not do on the supplement that caused this situation in the first place.

"Listen, everybody has a story and every athlete has an explanation," Kogan said. "All we ask for is that people do their own research before they jump to conclusions and then arrive to a conclusion after that. Don't just read the headlines and be influenced by headline-chasing reporters based on that. You know, everybody cries wolf, but there are circumstances where the wolf is really there. I strongly believe that this is that circumstance."