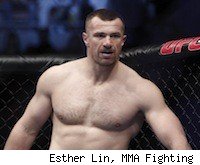 Three months after calling it quits in the MMA arena, Mirko "Cro Cop" Filipovic has chosen to continue his combat sports career, going back to his roots in accepting a kickboxing match with Ray Sefo.

The bout will take place on March 10 in Zagreb, Croatia. Cro Cop confirmed the fight to several Croatian news outlets.

Cro Cop recently had a cast removed from his injured right arm and even before that, was preparing for the possibility of another fight.

The 37-year-old fought MMA for the last time in October losing by third-round TKO to Roy Nelson. The defeat was his third straight overall, all coming by way of knockout. He finished his MMA career with a record of 27-10-2, 1 no contest.

In December, Cro Cop posted a video with his thoughts on his MMA career, apologizing for his 4-6 record in the octagon, but said that he planned to train hard for his kickboxing return, calling the sport "his first love."

"This fire in me will last forever," he said then. "This is not just some fight to me. Like every time, I will prepare like it's the most important fight in my life."

Sefo is a decorated 40-year-old kickboxer with a 56-21-1 lifetime record. Sefo also fought three times in MMA, going 2-1 with his only loss coming to Valentijn Overeem at last February's Strikeforce: Fedor vs. Silva event.