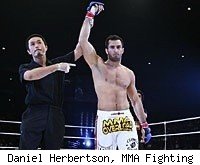 Rumors of a bout between Gegard Mousasi and Mike Kyle have spread at various times over the last year. In fact, the duo seemed destined to meet in both April and September of 2011 before various issues sidetracked the pairing from being made.

Sources with knowledge of the situation confirmed that the Mousasi-Kyle matchup has been agreed to as the co-main event of March 3's Strikeforce: Tate vs. Rousey event.

Mousasi (32-3-2) was last seen just over one month ago, showing improved takedown defense to go with his usual aggressive striking game en route to a unanimous decision over Ovince St. Preux.

Meanwhile, Kyle (19-8-1, 1 no contest) is coming off a unanimous decision victory of his own, this one coming against Marcos Rogerio de Lima in September.

The winner of the bout may eventually earn a chance to fight for the vacant Strikeforce light-heavyweight title.

Mousasi-Kyle is the co-headliner just underneath a women's bantamweight title bout with Miesha Tate against Ronda Rousey. As MMA Fighting reported earlier Monday, a lightweight fight between Conor Heun and Ryan Couture was just added to the event as well.