The Frustrating Search for the Real Chael Sonnen 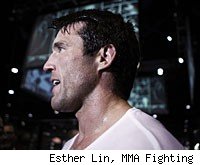 I remember a moment from the IFL's short-lived glory days when a new hire was being introduced to all the fighters and coaches as they floated in and out of a hotel conference room for pre-fight interviews. This new employee wasn't much of an MMA fan (par for the course at the IFL, I'm afraid), so she needed to be told basic info, like that Pat Miletich was something of a living legend or that Chris Horodecki was, in fact, a pro fighter and not just some kid who'd wandered in off the street.

When Matt Lindland's Portland Wolfpack crew came through she shook all their hands and tried, with visible effort, to commit their names and stations to memory. Then she came to Chael Sonnen, who wasn't on the team but was still hanging around his Team Quest buddies in the most unofficial of capacities, occasionally excusing himself to the hallway to conduct what sounded like vague real estate transactions on his cell phone.

"And how about you?" she said to Sonnen at one point. "Are you somebody?"

You could tell what she's going for, but you could also tell how it must have sounded to Sonnen, who had recently been bounced out of the UFC after losing two out of three and was then fighting in BodogFight's even more short-lived series of off-shore events. How was he supposed to answer that question? How was anyone?

As I recall, he smiled sheepishly and deflected it as best he could. No, he was nobody, he told her. But maybe some day he would be. It was a good answer to an awkward question. And besides, if he'd told us all that he would eventually become the nemesis of UFC middleweight champ Anderson Silva, who was then just settling in to his own dominant reign, no one would have believed him.

That was a different Chael Sonnen. This was before he talked his way into the headlines, before he turned himself into a larger-than-life, pro wrestling-style character known for saying things he couldn't possibly believe. Now, that's what people expect from him. They practically demand it in every interview and public appearance. It makes you wonder if some part of Sonnen is sorry he ever put that hat on to begin with, since it would seem that he can't easily take it off these days.

"Not too much, no," Sonnen told me when I spoke to him on the phone last week, one day before Mark Munoz dropped out of their UFC on FX 2 bout and was replaced with Michael Bisping. "It's par for the course and it needs to be done. There's only one me. I see a lot of people try to come out and copy me, duplicate me, and give it the old college try, but at the end of the day, there's only one Chael Sonnen."

And maybe he's right, but that one Chael Sonnen has the power to be several different Chael Sonnens when it suits him. There's the muted, somewhat straight-talking Sonnen -- the one who, when I asked for his thoughts on the GOP primary, went on at length about how disappointed he was to see Herman Cain drop out of the race -- and then there's the brash, loud-mouthed one with a seemingly limitless supply of clever prepared material.

For example, take his answer to a question about whether he'd be disappointed if people remembered him for his interviews and WWE-style promos rather than his fights.

"That would be a compliment," he said. "I wouldn't feel bad about that. ..You know, these guys want to talk about God. 'Oh, I want to thank God. I want to thank God.' Listen, I'm a God-fearing man, go to church every Sunday and have since I was a boy. But if I ever found out that God cared one way or another about a borderline illegal fist-fight on Saturday night, I would be so greatly disappointed that it would make rethink my entire belief system."

See what I mean? It's funny, entertaining, and clearly a bit that he thought of independently of any specific question, and now applies it wherever he sees an opening. But it doesn't tell us much. It doesn't tell us how the real Sonnen might really feel about the way his career is shaping up, the way the character he created is threatening to overshadow the person that he is.

Not that we know much about that person, of course. That's either because Sonnen keeps him hidden, or because his public persona is so dependent on a kind of aggressive insincerity that it's almost impossible to tell when he's playing it straight.

In Bisping, Sonnen said, he sees a fighter who's "not very good," but who he respects nonetheless for his ability to win the fights the UFC gives him.

"He certainly hasn't beaten anybody that's any good, rankings-wise," said Sonnen. "But Bisping, you can't take from him, because he wins. Regardless of the opponent, which he doesn't have a lot of say in, he gets his hand raised. That's undeniable. ...I'm not a naysayer on Bisping. I'm a supporter, and if he got a shot [at the title], I'd tune in to watch."

Of course, if Sonnen beats him on Saturday night in Chicago, that title shot will be his. So the UFC says, anyway, although Sonnen claims not to believe it. No matter what UFC president Dana White says about the stakes for this fight, Sonnen insists that Silva won't take a rematch with him, that their paths "will never cross again, professionally."

"I've got nothing against competing with Anderson, but he does. He's been offered the fight four times and he's turned it down four times. So I'm not under any illusions that Anderson and I are going to fight again. He's not a guy I talk about anymore. He's a guy I've moved past."

Does he mean it? Probably not. Does he expect you to believe it? Unclear. Four days later on the media conference call he cranked it up for the larger audience.

"I called him out publicly," he said of Silva. "If you call a Brazilian out publicly, you're going to be fighting that Brazilian. That's in their culture. And he sat there and covered his mouth and hid behind Charles Barkley, which was a smart move on his part and saved him a trip to the hospital, but Anderson Silva's not going to fight me. I don't believe he's going to fight Bisping; I don't believe he's going to fight again. That's my personal opinion. What I know as a fact is he's turned me down four out of four times. He even said no to Lorenzo Fertitta's face. Face-to-face, not over the phone, Lorenzo brought him out, said, 'This is the fight we want,' and Anderson said no."

And why, in Sonnen's opinion, does Silva not want to fight him?

"Because he sucks," said Sonnen.

Again, is that a real opinion? Does he truly believe that the most dominant middleweight champ in UFC history just isn't any good? Probably not, but what does it matter as long as it makes for a good sound byte?

That's the trouble with making yourself into a character for public consumption, though. Everyone keeps trying to peek behind the mask, but they can never know if they've done it. They can never be sure if they're seeing the man himself or just another part of the disguise. These days, Sonnen is definitely somebody. What's less clear is who that somebody is.