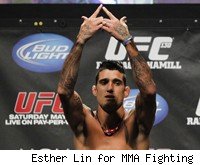 The fight wasn't much of a contest: Grove was clearly the superior fighter from start to finish, and he spent most of the bout in a dominant position on the ground, never coming close to finishing Minowaman but also never being in any danger of losing. All three judges scored it 30-27 for Grove.

"I should have finished him but he's a tough legend and it's a privilege for me to fight a guy like Minowa," Grove said afterward.

It was the 93rd fight of Minowaman's MMA career -- and his first in the United States -- and it was a reminder that he's better suited for fighting the likes of Bob Sapp and Hong Man Choi than he is at fighting good opponents of his own size under North American rules. For Grove it was a decent win, but not the kind of performance that will get him back in the UFC.

In the semifinals of ProElite's heavyweight tournament, Ryan Martinez beat Cody Griffin by unanimous decision, 30-27 on two cards and 29-28 on the other, in a fight that had brief spurts of action but long stretches of inaction. And in the other semifinal, Richard Odoms bounced back after struggling early and forced Jake Heun to tap out to a neck crank.

Olympic wrestling silver medalist Sara McMann got the biggest win of her MMA career, beating Hitomi Akano by unanimous decision. The fight was mostly a stalemate on the ground, but McMann was the one taking the fight there and staying on top, and so it was no surprise that all three judges gave McMann all three rounds of the fight.

In other ProElite action, Pat Cummins had an easy time with Tasi Edwards, dominating him on the ground and submitting him with an arm-triangle choke in the first round. And in the first fight on the televised HDNet card, Brent Schermerhorn knocked Kaleo Gambill out cold with a brutal left hook to the chin in a fight that lasted just 45 seconds.