UFC on FX Morning After: Anik, Florian Put on a Good First Show 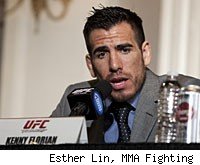 The work done inside the Octagon at the first-ever UFC on FX event Friday night was good, but before I get to that I'd like to take a moment to praise the work done behind the microphone.

Jon Anik, doing live play-by-play in the UFC for the first time, was a breath of fresh air. And UFC fighter Kenny Florian was a solid color commentator alongside Anik. This is a pairing that should grow together (they already have chemistry from working together on ESPN's MMA Live) and provide an authoritative pair of voices on UFC broadcasts.

Anik, in particular, is worthy of praise. He's well-prepared, knowledgeable and informative. Anik is smoother and more direct in his delivery than Mike Goldberg, the UFC's longtime in-house play-by-play man, and he seemed better able to work background information about the fighters into the flow of the fight, whereas Goldberg sometimes comes across as though he's forcing it.

If Anik continues to grow as a play-by-play man, he's going to be an excellent addition to UFC broadcasts. He has a natural feel for the flow of a fight, a good voice, and an understanding of the sport and how to describe the action. On Day One as a UFC play-by-play man, I already prefer him to Goldberg.

In addition to play-by-play, Anik handled the post-fight interviews on Friday night, and there he seemed a little bit out of his element. At times in the post-fight interviews I thought Anik ventured too far out of the commentator role and into fan territory, with comments like telling Josh Neer, "Your chin is unreal, dude." Although Anik is a UFC employee, I believe he'll better serve the audience if he comes across as more of a straight shooter and less of a promoter.

As for Anik's on-air partner, Florian is at his best when he's telling viewers why a fighter is doing what he's doing. For instance, when Daniel Roberts had Charlie Brenneman in a guillotine choke on the ground, and Brenneman escaped by turning away from it, Florian did a good job of explaining what Brenneman was doing.

"Immediately you can see Brenneman countered that guillotine choke by going to the far side," Florian said. "Going to the opposite side of that arm, that is the way you want to counter."

Lots of fighters know enough Brazilian jiu jitsu to know that, but what makes Florian good on TV is that he's eloquent enough to explain it quickly and clearly while it's happening. I also liked Florian's work on Friday night because I never got the sense that he had friends or favorites among the fighters inside the cage, which isn't always the case with fighters who work as commentators.

UFC on FX Notes
-- This was a very good fight card, from top to bottom. There wasn't a bad fight on it, and there were some sensational finishes, including six in the first round.

-- The main event went pretty much how I thought it was going to go: Jim Miller is just too good on the ground, and Melvin Guillard is just too bad on the ground, for a ground exchange between them to end any way other than Guillard tapping out. Miller is now 21-3 in his MMA career, with 12 of his wins by submission. Guillard is 29-10-2, with nine of his losses by submission. It's a shame that Guillard has never developed much submission defense because other than that glaring hole in his game he has the talent to be a champion.

-- Jorge Rivera retired after his fight with Eric Schafer. Rivera, who will turn 40 next month, has had a long and honorable mixed martial arts career, and it's easy to see why he has decided that now is the time: He's been fighting professionally for more than a decade, and his time in the UFC goes all the way back to UFC 44, when he beat David Louiseau, and there's not a whole lot left for him to do inside the Octagon.

Most of the talk recently about UFC fighters' pay has focused on either the entry-level fighters making as little as $6,000 a fight, or on the stars who make millions. I'd like to hear more about how well mid-level veterans like Rivera are doing financially. I would hope that Rivera has made enough money in his 15-fight career to pay off a house, put some money away for retirement, set up his gym back home in Massachusetts and generally be financially comfortable, if not rich, now that he's done fighting. Eventually it would be great to see the UFC reach the point where vested veterans have pension plans.

UFC on FX Quotes
"I was so excited. Like, I was super excited. I didn't know what to do. I was just like, I'm going to go in there and go crazy." -- Daniel Pineda, who sounded as happy as a kid on Christmas morning after he earned a first-round submission win over Pat Schilling in his UFC debut.

"I know the whole world says my jiu jitsu coach is James Toney." -- Pat Barry, making a joke at his own expense by acknowledging that his ground skills have looked almost as rudimentary as Toney's in the past. Barry still has some work to do on his takedown defense, but he did a nice job of defending himself on the ground and getting back to his feet against Christian Morecraft before eventually knocking Morecraft out.

Good Call
Joe Silva made a great decision in signing Khabib Nurmagomedov, who looked tremendous in his third-round submission win over Kamal Shalorus, a win that improved his record to an amazing 17-0. This 23-year-old Russian has a great future ahead of him.

Bad Call
Referee Herb Dean was too quick to stand up the fight when Charlie Brenneman was inside Daniel Roberts' guard in both the second and third rounds. Brenneman and Roberts were both fighting and trying to improve their positions, and Dean should have let them work it out. Coming just six days after referee Dan Miragliotta was too quick to stand up Anthony Johnson and Vitor Belfort at UFC 142, it was disappointing to see another good referee with two more premature standups.

Stock Up
Nick Denis got things started with a sensational knockout of Joseph Sandoval, using four straight short elbows to put Sandoval down just 22 seconds into the first round. The 28-year-old Denis, who has previously fought for Sengoku in Japan as well as a few smaller American promotions, is a great addition to the UFC's bantamweight division.

Stock Down
Tommy Hayden was an undefeated prospect heading into Friday night, but he had built up his 8-0 record fighting unknowns on small cards, and he wasn't ready for a grizzled veteran like Fabricio Camoes, who schooled him on the ground and made him tap in the first round. Hayden probably needs a few more fights on smaller shows before he'll be ready to step back into the Octagon.

Fight I Want To See Next
I'd love to see a rematch between Jim Miller and Gray Maynard. When they fought in 2009, Maynard won by unanimous decision, but I believe Miller may have improved more than Maynard since then. That fight would be a fascinating battle between two of the lightweight division's best grapplers.