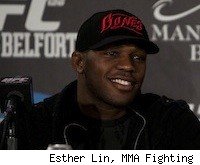 After four dominant wins in a banner 2011 that saw him ascend to UFC light-heavyweight champion, Jon Jones said he was headed for a long vacation, but after about one month on the sidelines taking care of other business, Jones is ready to begin preparations to get back into the octagon.

During an interview on Friday night's UFC on FX post-fight show, Jones said that he's awaiting his next assignment, which is likely to come in the form of either Rashad Evans, Dan Henderson or Phil Davis.

Asked when he might return, Jones (15-1) said he was "hearing rumors" of a date in Atlanta for what would be UFC 145.

Given the current scheduling situation, Jones is a near lock to be slotted into the card, which will take place on April 21 at Philips Arena. The UFC has already announced 10 bouts for the event, but it is conspicuously missing a headliner.

Jones may know his fate as early as next weekend, when Evans and Davis battle in the main event of UFC on FOX 2. If Evans wins, he has been assured a chance to fight for the belt in a bout that would likely be the grudge match of the year. He would, however, have to come out of the fight injury-free, no sure thing against the grinding style of Davis. With less than three months between the January 28 FOX fight and the April date, Evans could miss out on another title opportunity should he suffer any injury setback.

If that were the case, Henderson would almost certainly be thrust into the spot ahead of Evans. Henderson is coming off his epic UFC 139 win against Mauricio "Shogun" Rua in a bout that many are calling the best fight in UFC history. In the aftermath, Henderson turned down a fight with Antonio Rogerio Nogueira in order to wait and see how Evans-Davis turns out. The calculated gamble may turn out to provide dividends.

A Davis win would muddle the picture greatly. Though UFC president Dana White has said he'd prefer the 41-year-old Henderson over a victorious Davis, a dominant performance by the young upstart might cause him to reconsider.

Either way, it seems likely that Jones will have one of the three queued up and ready to go within two weeks as the champion looks to follow up his brilliant 2011.