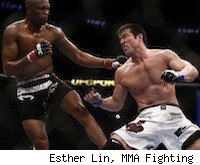 Chael Sonnen says forget about it, that Anderson Silva can't or won't fight him in a rematch of their August 2010 bout. Not now, not ever. That's what Sonnen said on a Friday teleconference for next weekend's UFC on FOX 2 show.

"I can guarantee you, Anderson Silva and I will never cross paths again," he said.

But Friday night brought another guarantee, this one from UFC president Dana White, who tends to get the final word on such matters. When asked about Sonnen's comments in a UFC on FX 1 post-fight interview with FUEL TV's Ariel Helwani, White offered a very different opinion of what would happen if Sonnen emerges victorious in his bout with Michael Bisping.

"I, 100 percent, right here and now, guarantee you that if Chael Sonnen wins that fight, Anderson Silva will fight Chael Sonnen this summer," he said.

Silva is currently back home rehabbing injuries, and is expected to fight at the next show the UFC hosts in Brazil. But Sonnen said otherwise on Friday, suggesting that Silva is not interested in fighting him or anyone else on the UFC roster, and that the long-reigning, 36-year-old champ has competed for the last time.

"I can tell you that behind the scenes, they tried to put me and Anderson together four times, and four times he said no," he said. "I called him out publicly. You call out a Brazilian publicly, you're going to be fighting that Brazilian. That's in their culture, and he sat there and covered his mouth and hid behind Charles Barkley [at UFC 136 in Houston], which is a smart move. It saved him a trip to the hospital. But Anderson Silva is not going to fight me. I don't believe he's going to fight Bisping. I don't believe he's going to fight again. That's my personal opinion."

But White disagrees, going on to acknowledge that the fight would "probably" happen in Brazil, a prospect that seemed unlikely just a few months ago, when Sonnen was politely asked to leave the country instead of escorting his friend and training partner Yushin Okami to the cage in a title fight with Silva. After being queried about Sonnen's safety should the fight be exported to Silva's home turf, he went on to suggest that the man who has called out Silva every which way imaginable has more than a few fans should the fight go down there.

"I know a lot of people say that, but a lot of people don't realize that Chael Sonnen was actually down in Brazil helping Yushin Okami get ready for his fight down there," he said. "For as many people -- Brazilians -- that hate Chael Sonnen, there's a lot that like him, too."