Dana White: GSP Hates Nick Diaz, Will Be Ready to Fight Him by Summer 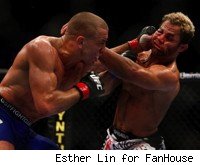 Nick Diaz will fight Carlos Condit for the UFC interim welterweight championship on February 4. But what happens to the interim champ after that? UFC President Dana White says he expects the interim champion to fight the reigning champion Georges St. Pierre sooner rather than later.

After UFC on FX 1 on Friday night, White told Ariel Helwani that St. Pierre is in better shape following surgery to repair a torn ACL than doctors expected, and that St. Pierre is already working out and getting himself prepared for a welterweight title unification fight in the summer. That's a more optimistic timeline than previously reported: St. Pierre had indicated he didn't think he'd be able to return to the Octagon until the fall.

"GSP's rehab could not be going better," White said. "He was texting me pictures of him kicking, doing everything. ... I think he's going to be back sooner than doctors anticipated."

So it sounds like the Condit-Diaz winner will take on St. Pierre next, rather than defend the interim title while St. Pierre continues to rehabilitate. And while St. Pierre has no control over which man he fights next, White said St. Pierre is hoping it's Diaz.

"He says, 'I am praying every night when I go to bed that Nick Diaz wins this fight,'" White said. "I have never seen Georges St. Pierre hate somebody. He hates Nick Diaz. I've never seen him so motivated to fight somebody and to beat somebody like Nick Diaz."