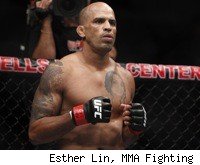 This is the UFC on FX live blog for all the preliminary bouts televised on FUEL in support of tonight's FX card from the Bridgestone Arena in Nashville, Tenn.

Round 1: Denis throwing a series of combos early. Sandoval getting tagged. Fighting in close and Denis lands a series of elbows from a Thai clinch that put Sandoval's lights out. A quick ending to start the night.

Round 1: Both fighters are making their UFC debuts. The duo exchange kicks to the lead leg to start the action. Pineda takes Schilling down from a body lock and moves right into mount. After some ground and pound, Schilling gives his back. Schilling gets to his feet with Pineda on his back, but Pineda sinks in a rear naked choke and digs in his hips, pulling Schilling backwards and down. The choke is sunk, and it's a wrap.

Round 1: Hayden staggers Camoes briefly with a stiff jab. Camoes shoots in but Hayden sidesteps him and gets free. In a scramble, Hayden takes Camoes back and drags him down. Camoes hunts a kimura, but Hayden works free. Back to their feet. Camoes initiates a clinch and they end up back on the ground, Hayden on top in half-guard. Camoes tries an oma plata. Hayden works free but sweeps Hayden down. Camoes lands punches from the top. Hayden gives up his back. Camoes digs in for the rear naked choke. Hayden looked like he was tapping but the ref let the action go on. Camoes regripped it and then got the tap.

Round 1: After a long stretch between fights, we're finally back to action. Roberts drills Brenneman with a left hand but gets taken down for his troubles. Brenneman moves to side mount but only briefly as Roberts stays active on the bottom. Brenneman with short strikes from the top, and back into side mount. He traps Roberts' left arm in a crucifix and starts laying the leather. Roberts works his arm free but Brenneman retains the position. Brenneman with some knees to the body and peppering Roberts with punches. Nothing big enough to threaten a stoppage, but enough to keep the position. Roberts gets back to his feet with 10 seconds left but Brenneman slams him down. It's Brenneman's round 10-9.

Round 2: Roberts comes out with a left high kick early. It doesn't land flush. Brenneman tries a takedown, Roberts attempts a guillotine, well defended. Brenneman on top again, and works into side control, and into the crucifix again. Roberts works back to a neutral position and ties Brenneman up, leading to a standup. Brenneman wastes no time going low again. Roberts goes for a kimura, then tries to get to his opponent's back. Then he slickly transitions to an inverted triangle. There are just seconds left and he can't tighten it up enough for the tap before the horn. It's still Brenneman's round, 10-9.

Round 3: Roberts is on his back again within the opening 20 seconds. Brenneman is mostly having his way with Roberts on the ground. His strikes aren't shaking the cage, but it's enough to score points and keep Roberts from throwing up sub attempts. Midway through the round, ref Herb Dean stands them up. On the restart, Roberts goes for the takedown but Brenneman defends and ends up on top. It's an effective smothering by him. Roberts hunts a kimura as time runs low. He pulls Brenneman's arm out but can't torque it enough to force the tap. It's Brenneman with the shutout, 10-9.

Round 1: Nurmagomedov is an undefeated 23-year-old who has never fought in a cage before. Nurmagomedov looks a bit uncomfortable early, circling against the fence keeping a distance. Shalorus takes the center of the cage. Out of nowhere, Nurmagomedov lands a right hand that floors Shalorus. Nurmagomedov pours it on as Shalorus tries to keep moving and out of trouble. Ref Mario Yamasaki looks them over but Shalorus is defending well enough to allow the fight to continue. Nurmagomedov's strikes come from unorthodox angles but land. They're back to their feet with 45 seconds left. Both men throwing haymakers but it's Nurmagomedov landing the bigger blows. It's his round 10-9.

Round 2: Shalorus looks a takedown, Nurmagomedov defends and instead puts him on his back against the cage. Nurmagomedov moves to half-guard with his ground and pound. The ref stands them up with three minutes left. Nurmagomedov shoots low for a takedown and puts Shalorus down again. Shalorus keeps his hips active, not allowing Nurmagomedov to land anything significant, but he can't escape from being underneath. The ref restarts them again. Nurmagomedov lands a left uppercut as the round ends. It's his round again, 10-9.

Round 3: Shalorus is trying to measure an overhand right to end things, probably knowing he's down on the scorecards. Nurmagomedov went for a single leg and Shalorus countered with a guillotine that was never close. Nurmagomedov mounts with 3:00 left and sinks in a choke. Shalorus taps with a quickness.

Rivera has announced that win or lose, this will be the last fight of his decade-long career.

Round 1: Rivera tries to let his hands go early but Schafer ducks under a right hand and puts Rivera on his back. No surprise as Schafer wants to be on the ground at all times, and even more so against a big puncher. Schafer to half-guard as he throws elbows from the top. Rivera uses a whizzer to get to his feet. They're engaged against the fence with Schafer trying to go low, and he successfully scores another takedown. Schafer with a big right from the top as Rivera tried to escape. Schafer worked to get the mount but Rivera wouldn't allow it and ended up on top. Schafer had an oma plata and was throwing elbows from the bottom as the round ended. Schafer, 10-9.

Round 2: Schafer is tenacious in trying to get the fight to the ground. Rivera sprawls and lands a hard right hand that cuts Schafer. Rivera swarms from the top with right hands. Schafer tries to cover up but Rivera continues unloading with right hands to the head and ref Herb Dean has no choice but to stop it.

Rivera drops down and kisses the mat as the fans chant "Jorge." A nice ending to his career. He retires with a 20-9 overall record, and 8-7 in the UFC.

"I'm grateful," Rivera said afterward. "I'm grateful that I fought here in front of a lot of people. I met a lot of great people. It's been a real nice trip. It's been real good to me. I'm extremely grateful. Thank you."