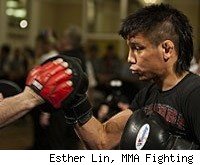 Atlanta's UFC 145 has rapidly taken shape over the last 24 hours, with most of the fights originally scheduled for Montreal shifted to the April 21 card.

But it also has some additions. Among the newest bouts signed is a bantamweight tilt with rising star Michael McDonald taking on former WEC champ Miguel Torres. The UFC confirmed the matchup on Friday afternoon.

Just 21 years, McDonald (14-1) is considered one of MMA's brightest lighter weight prospects, and he's won all three of his octagon bouts so far, most recently knocking out Alex Soto in just 56 seconds at UFC 139.

Torres (39-4) is coming off a unanimous decision victory over Nick Pace on the same card. Shortly thereafter, Torres was released from the UFC after making offensive comments on Twitter. Within three weeks, however, Torres had met with company president Dana White, who decided that Torres had shown remorse for his mistake and he was re-signed.

In addition to Torres-McDonald, eight bouts that were supposed to take place on the canceled Montreal show were moved over.

All told, 10 fights have been announced for the show, which is quite conspicuously missing a main event. With light-heavyweight champion Jon Jones recently telling UFC brass he's ready to step back into training, a Jones title defense is a distinct possibility, though the UFC has given no indication of that happening.

The full card as it currently stands is below.