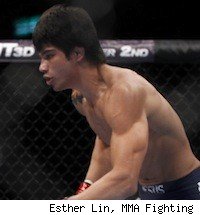 After a review of the controversial finish to UFC 142's Erick Silva vs. Carlo Prater bout, UFC's vice president of regulatory affairs Marc Ratner has decided not to overturn referee Mario Yamasaki's decision.

Prater was awarded the victory when Yamasaki ruled that at least some of a series of Silva's finishing blows landed to the back of Prater's head, making them illegal. In a statement released by the UFC, Ratner noted that Silva had been previously verbally warned during the fight, making it "not the type of decision that can be reviewed."

Ratner's decision not to overturn the ruling is understandable, as the promotion does not want to put themselves in a position where their power supersedes that of the referee or any presiding athletic commission. But it does highlight the need for two things: instant replay, and a clear and consistent definition of the "back of the head" a vague term that leaves things far too open for interpretation in a sport that is fast enough and hard enough to referee as it is.

Depending on who you talk to, there are two explanations of it. Some referees use the term "mohawk," saying the illegal spot is an approximately one-inch wide strip right down the back of the head similar to the haircut. Others say the illegal area would be anywhere behind where a pair of earmuffs would be situated on the head.

There is simply too much at stake for the athletes for vague definitions to continue to exist. Silva, who momentarily believed he had a 29-second knockout, was suddenly robbed of a win that would have extended his unbeaten stretch to 11 straight.

Let's make one thing clear: the sport moves so quickly that refereeing a match becomes an exercise in split-second judgments. It's a difficult and often thankless job, and Yamasaki made his decision quickly and decisively.

That, of course, doesn't mean he can't be wrong from time to time. Much like NFL games can turn to replay to see whether a pass was caught in or out of bounds, MMA fights should be able to go to review to see if a blow that ended a fight was in fact, illegal. The fact that he warned Silva first shouldn't matter; a mistake should be corrected, period.

Replay and the vague definition are two separate issues, of course.

Cageside instant replay was not available at UFC 142, but in a statement, Ratner said Zuffa has "decided to implement the use of instant replay at all international events that are self-regulated, and to encourage all regulators to consider the feasibility and effectiveness of instant replay in the sport of MMA."

That change would be a positive step.

Replay has been used in Nevada for a few years now. In one memorable case, ref Steve Mazzagatti consulted a replay screen to determine that Jon Jones had committed an intentional foul against Matt Hamill, a decision that ultimately led to the first and still only loss on the UFC champion's record. That is an example of a fair use of replay; Mazzagatti had doubt, looked over the video and made the right call.

Expanded replay would give referees a chance to review their calls in pivotal situations. In the case of Silva-Prater, Yamasaki had to make his call, and then was faced with a situation where he was put on the spot to defend it when the replays were shown on the arena's big screens.

Of course, it might not have been necessary if we had a more decisive definition of what exactly the "back of the head" was. Yamasaki was notably the referee in an August 2011 bout between Vitor Belfort and Yoshihiro Akiyama, a fight that ended with questions about Belfort's finishing strikes, which many believed were to the back of Akiyama's head. In fact, you'd be hard pressed to watch the Belfort-Akiyama and Silva-Prater fights and determine one to be fair and the other worthy of a disqualification.

But those are the rules we play by in MMA today. As long as there's no clarification of the "back of the head" rule, we'll continue to face situations where the same strike will be interpreted as illegal in one fight, and never cause a blip of controversy in another. At least if we had a concise definition, we would know if our outrage is warranted.