Jorge Rivera Wins, Announces His Retirement From the UFC 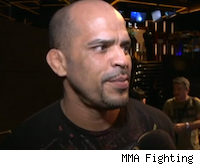 Jorge Rivera is going out a winner.

In the 29th fight of his mixed martial arts career, Rivera won by second-round technical knockout over Eric Schafer at Friday night's UFC on FX event. And Rivera announced that when he walked out of the Octagon, it would be the last time.

"I'm grateful I fought in front of a lot of great people," Rivera said afterward. "It's been a real nice trip. It's been good for me. Thank you."

It appeared in the first round like Rivera would go out a loser: Schafer took him down and got the better of him for most of the first round, and Rivera was struggling to get any offense going as Schafer controlled the fight.

But in the second round Rivera turned things around by pulling free of a low single-leg takedown attempt and jumping on top of Schafer on the ground. Once he got on top, Rivera did what he has done in many of his best UFC performances, simply hitting his opponent in the head until the fight was over. Rivera's ground and pound was impressive, and Schafer didn't have an answer for it.

Rivera, who will turn 40 next month, retires with a career record of 20-9. He's had an honorable MMA career, and he left it with a win, receiving a loud ovation and walking out of the Octagon with a grin on his face.