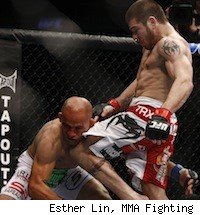 Jim Miller withstood some powerful striking from Melvin Guillard in the first couple minutes of their main event fight at Friday night's UFC on FX 1 card and then made Guillard pay, submitting him with a rear-naked choke in the first round.

It was a great showing on the ground for Miller, and a demonstration once again that while Guillard is a quick and powerful striker, he simply doesn't have a good enough ground game to compete at a high level.

"I don't get knocked down often, and he knocked me down. So he hits hard," Miller said of Guillard after the fight,. "I just found a way to the back. That's something I've always been able to do and from there it was just securing a position. I'm pretty confident that I'm the most dangerous lightweight in the world and I'm willing to make you guys believe that in here."

More: UFC on FX Results | UFC News
Guillard battered Miller with punches and knees in the first minute of the first round and looked like he might have been close to finishing the fight early. Midway through the round Guillard landed a flying knee, but Miller took advantage of Guillard being off balance by taking him down and getting on top of him on the ground.

And from there it was just a matter of time: On the ground Miller has a huge advantage over Guillard, and he easily transitioned to Guillard's back, sunk in a body triangle, and sunk in a rear-naked choke to force Guillard to tap.

The entire fight lasted just three minutes, and for about two and a half of those minutes Guillard was in control on the feet. But as soon as it went to the ground, Miller had it won.