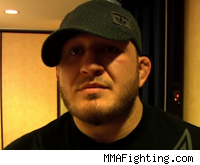 Mixed martial arts veteran Mike Whitehead was led away in handcuffs from a Las Vegas courtroom, sentenced to begin a term of between one and four years in Nevada state prison after pleading guilty under the Alford doctrine to a charge of attempted sexual assault.

Whitehead had pled guilty to the charge last September and had been expected to receive only probation, but according to an Associated Press report, Clark County District Court sentencing judge Douglas Herndon said he was troubled that Whitehead never admitted to the crime.

"I can't buy complete denial - that nothing happened," Herndon said. "I just can't put you on probation."

The judge also said that Whitehead would have to register for life as a sex offender and pay about $2,400 in restitution.

According to previous reports from The Las Vegas Sun, the victim told police that she and a friend had visited Whitehead's Las Vegas home in April 2010 for a barbecue and stayed there after drinking. Whitehead reportedly told the women they could sleep in his bed, which they did. One of the women said she awoke later to find her pants down and Whitehead having sex with her. According to the police report, she asked him to stop, but he continued for three minutes before stopping.

Whitehead had originally faced other charges in connection with the incident, and his plea deal ensured that he would not face a possible sentence of over a decade in prison.

The 30-year-old Whitehead has fought professionally for over a decade, competing in promotions including the UFC, Strikeforce, the WEC and the IFL. He was also a season two cast member of The Ultimate Fighter, and holds a career record of 27-7, a mark that will be frozen in time for the foreseeable future.