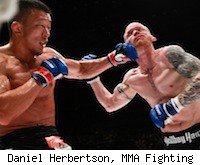 On Wednesday, it was announced that HDNet, a channel that was launched in 2001 and has regularly broadcast MMA since 2004, would undergo a change in name and identity.

Around the summer, the channel will be rebranded AXS -- a joint venture between entrepreneur Mark Cuban, TV host and producer Ryan Seacrest, talent agency CAA and venue owner/tour promoter AEG -- and feature a heavy rotation of lifestyle and live entertainment programming. That led to fears about the future of mixed martial arts on the channel, but late on Wednesday night, Cuban told MMA Fighting via email that the sport will still be a major component of the new network.

In fact, he said it may lead to even more coverage of the sport.

"Yes, and more," he said when asked if AXS would show as much live MMA as HDNet currently does.

"Inside MMA will move to our new studio at LA Live overlooking the plaza and we will have access to AEG venues hosting fights without truck pools," he said. "Which means we can do more live."

HDNet first broadcast MMA on January 23, 2004 -- even before The Ultimate Fighter debuted on Spike -- with a tape-delayed offering of a World Extreme Cagefighting event.

When the network relaunches with a new name in the summertime, it will be available in around 35 million homes, an increase of 8 million over its current distribution after an expanded deal with Dish kicks in.

"This is very good for our MMA business," Cuban said.