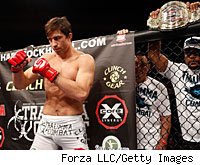 Strikeforce gave away more tickets than it sold at its Jan. 7 "Rockhold vs. Jardine" event at the Hard Rock Hotel & Casino in Las Vegas.

According to figures released Wednesday by the Nevada athletic commission, the event sold 927 tickets for a live gate of $68,805. A total of 1,992 were in attendance, 1,065 of which watched for free. Meanwhile, 727 tickets were left unsold.

As previously reported, the total fighter payroll was $566,000.

"Rockhold vs. Jardine" was the first Strikeforce card under the promotion's new deal with Showtime. The main card was televised on Showtime and the preliminary card aired on Showtime Extreme.