Melvin Guillard Doesn't Believe He Lost Anything Against Joe Lauzon 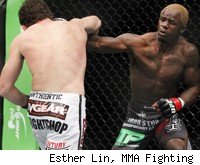 After a setback at UFC 136, Melvin Guillard's climb back up the UFC's 155-pound ladder begins Friday night against Jim Miller at UFC on FX Fight Night.

MMAFighting.com recently spoke to "The Young Assasin" about what went wrong in his most recent loss against Joe Lauzon, why he decided to leave Greg Jackson's camp, and why he considers this upcoming fight against Miller to be a "blessing."

Ariel Helwani: Why did you decide to leave Jackson's for the Blackzilians in Florida?
Melvin Guillard: [There's] just some things I like about the training here and the place where it has me set mentally. I have a better mental game here. You know, I don't want to go too much into comparing both gyms, but like I said in the past, both gyms are great, just one is giving me something that the other didn't. So I have to look out for my interests and make sure what's best for me at the end of the day so I can become a world champion.

Did your loss to Joe Lauzon prompt the move?
Oh, no. No, no, no, no. The loss had absolutely nothing to do with it. What coach Greg [Jackson] and coach [Mike] Winklejohn have done for me, I will always be grateful for. The tools they've given me, the things they showed me while I was there ... No, the loss to Lauzon had absolutely nothing to do with my decision. This was a decision that I chose for myself because I just felt like it I had to give myself a different look. You know, coach Greg and those guys are some busy guys, they got a lot of high-profile fighters there, and they just couldn't give me the one-on-one time that I needed, at certain times, and that was part of my decision, as well.

How did they react to you telling them that you were leaving their camp?
Everybody is okay with everything. There's no hard feelings. If I would have to go back that way, that direction, the door's always open for me. At the end of the day, it's business. I learned the hard way, you can't get emotionally attached in this business because you see some guys get attached to certain trainers and they get stuck at a point in their life where they're not getting better. For me, that wasn't the case, but I just felt like I wanted to make this change to see if it works. It's something that I'm trying out, and if it don't work, and if I had to go back to Jackson's, I don't think they would be upset about that.

Why do you think your fight against Lauzon at UFC 136 turned out the way it did?
I was just impatient. I rushed myself. I rushed my attack and I ran into a stiff jab. I don't take anything away from Joe. He capitalized on my mistake. That's the thing about this level of competition, if you make a mistake and you capitalize on it, you see what happens. You can end up having a short night. So that's what happens. That's the only thing, to me, that Joe Lauzon did that I didn't do. I made the first mistake and he capitalized on it.

He said after the fight that he believed you were looking past him. Is that accurate?
Nah, I never look past anyone. I never look past any fighter; I take every fight serious. I wouldn't have asked to fight the guy if I didn't think he was tough. I wanted to fight in Houston, and I begged them to let me fight in Houston, and I had a minor setback. Did I ever for once think that Joe Lauzon would be a walk in the park? No. Joe Lauzon is a very tough competitor, and I take my hat off to the guy. He was the better guy that night.

Did you feel as though all the talk about you being so close to a title shot put too much pressure on you?
No, nothing got to me, man. I was just excited to fight in front of friends and family, which I haven't done in years, since my dad had passed. To me, that's what it was all about. It wasn't about the job itself, there was no stress there. I was just impatient. I just rushed my attack, and I got caught.

Dana White's video blog showed how emotional you were after the fight. Could you describe how you felt once the moment sunk in?
I walked in the back, and I was with Dr. Tripp, my judo coach, and me as a student to my craft, when I see my coaches, sometimes I feel like I let them down. At that point I felt like I let myself down because for that short period of time that you guys saw me break down and have my moment, it ran through my mind, Man, I asked for something, I failed, and now I may not get that opportunity to fight for that world title. That's what went through my mind and it hurt for a minute.

But then, just instantly after it happened, I got up and was like, I can't let this beat me. No matter if I have to go back three fights, two fights, one fight, I have to go back and fight my way back to the top again because, rightfully so, when someone beats you that guy takes your place. And then I was blessed with this fight with Jim Miller. To be able to come back and fight another top contender guy, who also had a loss, that's just the way the cards were played. I don't think I lost or gained anything from the Joe Lauzon fight. I definitely didn't lose anything, and I know I didn't gain anything. The only thing that I would say I gained was I learned how to be patient because I was impatient with my attack.

What was your reaction when they offered you this fight, considering it's a main event fight on FX against another top contender?
I was humbled. I'm always a humble guy, but I felt like it was a blessing from above. I felt like the owners understand that sometimes we have a bad night. But I don't want to have a bad night two nights in a row. That's up to me to prevent that from happening. But as far as that goes, I'm just blessed to have understanding bosses. Some people work for Fortune 500 companies, they make a mistake and it costs their job a bunch of money, they might lose their job. In my situation, I'm not going to say I cost them any money, but I still have to go in there and prove myself. I have to prove that Melvin is going to always be a part of the elite, because in the UFC, there's no going backwards. Once you're not the top elite, you're pretty much on your way out the door because they're going to bring in other guys in.

My main goal is to stay at the top of the heap. I'm not in a rush for the title. After the Lauzon fight, maybe I should go back and fight maybe two or three fights, at the most, and then that'll determine if I really belong in the position to fight for a title.

I read that you said recently that the UFC told you this was a No. 1 contender fight, which raised eyebrows since you are both coming off losses. Was that taken out of context?
Yeah, people take stuff out of context. A contender fight in the UFC ... you can have two, maybe three, No. 1 contenders. At one point, it was me, Jim Miller, and possibly Ben Henderson and Donald Cerrone. There were four of us that they were talking about possibly being in No. 1 contender fights. People take that No. 1 contender stuff out of context a lot. That's not my worry. My worry is to go and do my job and see what happens from there. I'm not looking past Jim Miller, like I never looked past anybody. You have to take every fight one fight at a time, and like my coach told me back in 2005, Warren Donnelly, when I fought Marcus Davis, he was like, 'Every fight from here on out is a title fight and you always have to make sure you fight to stay in.' That's been my whole goal, my whole purpose of being in the UFC the last seven years, you gotta fight to stay in. If I start worrying about chasing the title belt, I lose sight of the bigger picture, and next thing you know, I end up without a job. Because if you really look back at season 2 [of The Ultimate Fighter] alumni, it's only me and Rashad [Evans] left. Everybody else has been cut. So I focus more on that part of job, and I always go in there, win or lose, I always leave with my head up and I always give the fans a great, explosive fight. That's the way I fight.

Did you watch Miller's fight against Henderson and have you been able to pinpoint why he lost that fight?
Yeah, I've watched all of his fights, but I don't get caught up on trying to figure out what he's great at. I watch tape to see what he does repeatedly, like, the things a person does repeatedly are the things that when you're in the heat of battle you're going to go back to doing those things. Those are the things I look for. As far as worrying about his last fight, man, he could have been sick, he might have not been sick. He could have just gotten outworked. We don't know. The only person who knows that is Jim. So, I'm not going in there to fight Jim Miller's fight, I'm going in there to be me and that's the way I fight all my fights.

Is it safe to assume you want to keep this fight standing?
I'll take the fight wherever it goes. I've been working the last seven weeks with my BJJ instructor here. I do privates here everyday. I'm working with the Dutch kickboxing coach. So I'm confident to go wherever, and I'm not saying I'm going to pull of a submission, but I know I can damn well fight him off right now. I can damn well defend the submission the way I need to because I've been taught the proper way. I'm okay with wherever this fight goes.

Does it feel different to be going into a fight for the first time in a while coming off a loss?
No, I feel comfortable, not cocky. People take that out of context too. I feel very confident going into this fight. I feel great; my cardio is great. I've had a great training camp. I worked my butt off for this training camp. This has been one of the toughest training camps, but coming off a loss has not played into my mind. I've already put the Joe Lauzon fight behind me, and I'm looking forward, I'm not looking back. I'm not even looking back on all the five fights I've won. I'm looking forward to what's next and that's the way it's supposed to be.