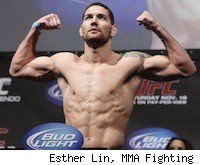 The pitfalls of the short-notice fight are among the most debated topics in MMA. On one side are the idealists, who cite the potential rewards of doing a favor for the promotion. On the other are realists, who caution against the risk of going into a fight unprepared. And then there are the fighters, who don't have the luxury of experiencing it as an exercise in debate. To them, these are real-life decisions that can make or break a career.

When an injury to middleweight contender Mark Munoz caused a reshuffling of January 28's UFC on FOX 2 lineup, it left an open slot opposite former No. 1 contender Demian Maia. Rousimar Palhares got the first call, and declined. The next man the UFC reached out to was Chris Weidman, the unbeaten 27-year-old who is straddling the line between prospect and contender.

Weidman needed only 30 minutes to seize the opportunity.

There were pros and cons to the decision.

The biggest plus was the chance to face Maia, a universally respected fighter who has been a consensus top 10 middleweight for about three years. A win would certainly announce him as a credible contender. But on the flip side were a few factors. For one, Weidman was nowhere close to peaking, after having been told he was probably going to fight on the April 21 Atlanta card. Because of the sudden nature of the offer, he knew he would have to cut a lot of weight in the next 11 days. Even worse, just three days before, he'd learned of the passing of his beloved uncle, Freddy Weidman, in an accident. Freddy Weidman, a recipient of both the Silver Star and Purple Heart stemming from his service in the Vietnam War, was 67.

Chris Weidman had just gotten home from a workout when he got the call from his manager, Ray Longo, and he took a few minutes to think about. He says the UFC offered no pressure to accept the offer, and told him they understood if he felt unprepared to take the step so suddenly. But when it all came down to it, the decision was easy. The chance to progress forward while gaining exposure on network TV was too much to pass up.

"I didn't want to lose the opportunity," Weidman (7-0) told MMA Fighting on Wednesday, while en route to his uncle's wake. "You only live once. I have an opportunity to gain a lot of recognition and get myself up to where I want to be. So it was like, I'll do it tomorrow if I had to. Some people never get that opportunity, so who am I to waste it?"

Maia (15-3) entered the UFC as a submission specialist, capturing each of his first five bouts via tapout. Since, then, his offensive arsenal has widened, with notable improvements to his kickboxing. Still, he is feared mostly for his ground prowess, as most opponents try to avoid that strength altogether. That could set up some interesting situations in the bout for Weidman, who has shown the ability to repeatedly take down opponents (70 percent takedown accuracy, according to FightMetric), as well as an aptitude for the ground game. He has tapped out each of his last two opponents, most recently choking Tom Lawlor unconscious with a D'arce at UFC 139.

Weidman says he won't hesitate to put Maia on his back if he sees a route to victory there. In fact, he says, he'll attack Maia with his own submissions.

"I'm not worried at all," he said. "I have a lot of respect for his jiu-jitsu, but if we go to the ground, I'm confident and excited to prove where I'm at with my jiu-jitsu. He's going to have a lot to worry about, too. If we go to the floor, I'm looking for submissions just like it's anybody else. I'm not the guy who's going to be starstruck. I believe in myself and I think I can go in there and submit him."

Weidman's fearlessness is partly due to his success and history; this won't be the first time he fights a high-profile bout on short notice. Last March, he made his UFC debut on little more than two weeks' notice and beat Alessio Sakara. Weidman said he didn't draw on that experience while making the decision to accept the fight with Maia, but acknowledged that he's never backed down from dealing with adverse competition conditions.

Right now, the most immediate obstacle is his weight. He said he's currently around 210 pounds, so he'll have to shed 24 to make the middleweight limit by next Friday night. Until then, he's planning to watch some film on Maia to learn tendencies and work on a general game plan. He says his conditioning is not a problem, and that even though he's not in the best shape of his life, he's been working out hard enough to go three grinding rounds.

The payoff may be huge or it could end up being a step backwards. And the way Weidman sees it, that's just fine.

"There's definitely a risk, but I could fight Joe Schmoe tomorrow and lose," he said. "That's the way this sport is. So I'm not holding out to fight guys that aren't that good. I'd rather take my risk against guys that people think are real good. I'm excited about that. There's pressure that goes with every fight whether you're the favorite, underdog or there on short notice. The bottom line is I've got to go in there and eat him up on January 28th."

The opportunity only came about due to a series of circumstances beyond his control. Munoz was hurt. Maia's original opponent was moved. And Palhares declined the fight. And despite just days to prepare, despite the weight issues and his uncle's recent passing, this short-notice fight was a risk worth taking.

"I like having adversity," he said. "It makes me tougher. It motivates me. And it will make the story better when I get that 'W.'"