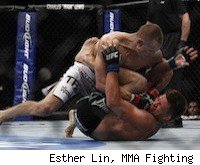 A UFC event that had been rumored for Montreal in March has been scrapped, the UFC has confirmed in a report published by The Canadian Press.

The report cited "complications in scheduling and a desire to deliver a championship card" as the reasons for the cancellation. Despite the move, the UFC is likely to return to Montreal sometime in 2012, UFC's director of Canadian operations Tom Wright told the news outlet.

UFC had never formally announced the event, which had been expected to take place at the Bell Centre. But the promotion's news page had listed the possibility, along with with a series of fights that had been planned for the outing.

The inability to bring a bonafide headliner to the event likely sealed the show's fate.

Among the fights the UFC had planned for the show were Rory MacDonald vs. Che Mills, Travis Browne vs. Chad Griggs and Brendan Schaub vs. Ben Rothwell. Many of the eight announced bouts will be shifted to an April 21 event in Atlanta, which was announced just last week by the UFC.