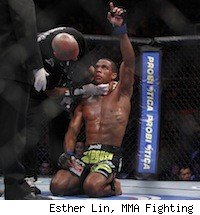 If I could look into my crystal ball into the future of one rising star on the UFC 142 card, it would be Edson Barboza. While I'm not ready to call him a surefire lightweight contender just yet, he certainly has flashed a skill set that's worthy of cracking the division's top 5. Now he has to continue delivering.

So far throughout his UFC career, Barboza has used his skills the same way Chuck Liddell used to; his defensive wrestling keeping him upright where he has the advantage against nearly anyone he faces.

But there are still questions about Barboza. For one, will his wrestling hold up against the division's best? Remember, this is a weight class heavy on former collegiate wrestling studs. From champ Frankie Edgar to No. 1 contender Ben Henderson to Gray Maynard and beyond, Barboza will have to prove himself able to handle a top level guy before we can anoint him the next great lightweight. That said, it's been exciting to watch his educated limbs deliver violence in new ways.

The comparison has been made between Barboza and featherweight champ Jose Aldo, and in terms of style, it's not all that far off. But lightweight is a much deeper division than featherweight, so Barboza has a long climb ahead.

On to the matchups...

Jose Aldo
It was nice to see Aldo flash the finishing instinct that made him a star in his early days under the Zuffa banner. While he's been accused of playing it safe his last few fights, his perfectly timed knee to the face that led to the finish is a strictly offensive move. If he missed it, he would have been off-balance to defend the takedown that was coming as Mendes went low. Instead, Aldo landed it flush and closed out the show. While many would like to see him move up a weight class, he's still just 25 years old and I'd like to see him cement a legacy at one division before moving up to another. Anderson Silva's become a huge star because he runs his weight class with an iron fist. Fans love dominance, and Aldo's slowly but surely building himself that kind of aura.
Prediction: Aldo fights the winner of February's Hatsu Hioki vs. Bart Palaszewski bout.

Chad Mendes
The bad news for Mendes is that he lost, but the good news is that he's not going to fall very far in the featherweight pecking order. While he struggled to take Aldo down -- he was 0-for-7 by FightMetric's count -- at least we know Mendes still has room to grow his offensive arsenal. That's because he's only been in the sport for about four years. While he'll still be in the upper tier of the division, he needs to work on his striking to be better equipped to deal with Aldo next time around. If there is a "next time."
Prediction: He fights Diego Nunes

Vitor Belfort
We already know Belfort's next assignment. He'll be the head coach of the first Brazilian edition of The Ultimate Fighter, alongside Wanderlei Silva, and after the conclusion of the show, the two will face off in a rematch of their 1998 match, a bout which Belfort won by knockout in just 44 seconds.

Anthony Johnson
What a nightmare of a middleweight debut for Johnson, who pulled off a triple dose of fail by missing weight, losing by submission and getting cut. Despite the disastrous evening, Johnson is just 27 years old and has reached a level of popularity that will make him a sought-after commodity in other organizations. But Johnson also has to take a good hard look at himself, realize that he's blown a couple of opportunities, and find a way to fix it, or otherwise risk never reaching the heights many expected him to.
Prediction: Johnson signs with Bellator

Rousimar Palhares
It's getting harder and harder to ignore Palhares as a contender after a third straight win. Amazingly, it was his fourth heel hook submission win in his last six UFC bouts. Most of the UFC's 10 best has their date book filled, so Palhares might have to play the waiting game for a bit until something opens up. Two available fighters right now though are Chris Weidman and Alan Belcher.
Prediction: Belcher gets the call to face Palhares

Erick Silva
It seems like every time we turn around, there's another Silva advancing into the upper echelons of the MMA world. The latest is the 27-year-old welterweight who lost by disqualification due to punches that were ruled to be illegal. He'll appeal the ruling, and regardless of the outcome, Silva will be treated as the winner when it comes to booking his next fight. Since he is still early in his UFC career, don't expect Silva to be rushed into fights with major names just yet.
Prediction: He faces Seth Baczynski

Edson Barboza
After four straight wins, the undefeated Barboza (10-0) looks just about ready to step into the shark tank against the lightweight division's big guns. He looks to have the complement of skills that make him a scary proposition for anyone, particularly with killer standup and great defensive wrestling. The only potential issue I see from Barboza is that he sometimes tends to step off the gas pedal. I'd match him up against a fighter known for forward aggression and wrestling and see how he does.
Prediction: He faces Danny Castillo

Gabriel Gonzaga
Kudos to Gonzaga, who returned to the UFC with a first-round submission win. Just as impressive was the fact that prior to the fight, he said he wanted to stop engaging in striking wars and return to his jiu-jitsu roots. He did just that. According to FightMetric, he wasn't hit a single time by opponent Ednaldo Oliveira in the 3-minute, 22-second fight. That's about as clean a win as you can hope for. It was a performance that was not only great for career longevity but also came with a finish, something that always makes fans and management happy.
Prediction: He faces the winner of UFC on Fox 2's Mike Russow vs. Jon Olav Einemo