Sean McCorkle Thinks MMA Should Do Away With Drug Testing 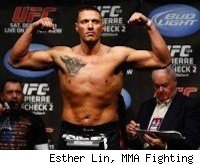 Already on Tuesday, we've heard news about former Strikeforce light-heavyweight Muhammed "King Mo" Lawal testing positive for steroids, as well as the UFC implementing a performance-enhancing drugs screening for all new fighters about to sign a contract with the promotion.

Suffice it to say, finding a way to stop cheating is a big topic of the day.

UFC fighter Sean McCorkle, who has always been known for his blunt honesty, has another idea, though. If it were up to him, McCorkle would level the playing field by doing away with drug testing completely.

"What you end up with is a situation of where the guys who are beating the test, where the guys who can afford to get a doctor to prescribe whatever they want, where the guys who have access to stuff, they have an unfair advantage already," he said on Tuesday's edition of The MMA Hour. "I think we'd be pretty naive to think that every person who's ever taken anything was caught. So I think, to me, in all professional sports, I say, let guys do whatever they want to do and be done with it. I don't think anybody's going to make or break their career based on steroids unless you're talking about longevity, because to my understanding, the majority of them are used for recovery from injury."

He noted that at least when it comes to MMA, most athletes aren't looking to gain muscle mass since most have to cut weight during the course of training camp.

McCorkle (13-2) who had three fights in the UFC in a six-month stretch from Sept. 2010 to March 2011, is currently a free agent and has three fights scheduled for the future, with the first coming on January 28 on NAAFS' Caged Fury 16 card in Morgantown, West Virigina.

McCorkle hopes to parlay a win streak into another job with a major MMA organization, but even if he were thrust back into a job with other elite heavyweights, he would have no issue with fighting in a league with no drug testing, noting that "most guys who test positive have lost their fights."

Part of his issue with it stems from the difficulty of defining what is and isn't a PED.

"There's stuff at [nutrition store] GNC that will make you pee hot for a PED, and it's not necessarily something that's going to enhance your performance at all," he said. "It's just something that's banned."

As an example of the madness, he said that when he was in the UFC, he was told by company officials not to take Tylenol or aspirin during fight week. He also noted that PED problems are not simply an issue in MMA, but throughout the entire sports world, and one that will likely never be fully stopped.

"I always said in the past, the only people who take steroids are the guys who like winning and money," he said.