ProElite to Partner With DREAM 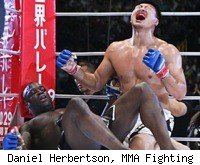 ProElite and DREAM have entered into a partnership that will see fighter exchanges and possibly co-promoted shows.

T. Jay Thompson, the head of fighter operations for ProElite, leaked the news while stopping by Tuesday's installment of The MMA Hour.

"We will be partnering with DREAM not only with a fighter exchange program," Thompson told host Ariel Helwani. "But some serious talks about bringing DREAM to the U.S. and bring ProElite to Japan."

Thompson plans on establishing ProElite as a fun company and is excited with its matchmaking options now that there's a strong possibility of fighters such as Shinya Aoki and Tatsuya Kawajiri entering the fold.

"With the brain power and relationship between (ProElite matchmaker) Rich Chou and I, we're going to put on high-quality MMA cards," Thompson said. "And the matchmaking styles leads into some of these great Japanese fighters."

ProElite is expected to announce details of its fourth card, most likely in early April, during Saturday's event.