Chris Weidman to Face Demian Maia at UFC on FOX 2 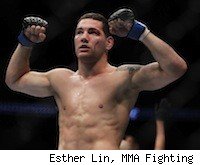 Maia was previously slated to face Michael Bisping on that same card, but lost his opponent when Bisping was shuffled into a fight with Chael Sonnen, replacing an injured Mark Munoz on the Jan. 28 event in Chicago.

According to White, Weidman accepted the short-notice fight against Maia after it was offered to another Brazilian jiu-jitsu specialist, Rousimar Palhares, who turned it down.

More Coverage: UFC on FOX 2 Fight Card
Weidman comes into the fight with a perfect 7-0 record, with the last three of those wins coming in the UFC. He last competed at UFC 139 in San Jose this past November, where he choked out Tom Lawlor with a first-round D'Arce choke.

Maia, a former UFC middleweight title contender, last competed at UFC 136 in October, defeating Jorge Santiago via unanimous decision. Earlier today he wrote on Twitter that he was "very sad" his fight with Bisping wouldn't go down as scheduled "cause it would be a very important fight for me."

Once White announced that Weidman, a former All-American wrestler at Hofstra University, would be stepping in to take Bisping's place, the Brazilian middleweight responded simply, "Thanks boss!!!"