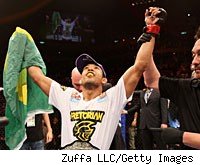 UFC 142 is in the books and another Brazilian event has ended without any rioting or bludgeoning of referees. Now it's time to sort through the action for the biggest winners, losers, and everything in between.

Biggest Winner: Jose Aldo
There's the human highlight reel we remember from the WEC days. Even with an opponent intent on dragging him down and holding him there, Aldo created just enough space to work his magic, spinning away and firing off a perfectly timed, perfectly placed knee that showed off both his explosive athleticism and his powers of anticipation. After the first-round knockout, Aldo charged into the crowd to celebrate with his countrymen -- and to give UFC president Dana White a heart attack. Like something out of a sentimental sports film, the mob hoisted Aldo on its shoulders and showered him with love. In fact, the roughest treatment Aldo received was from the security team that tried to wrangle him back into the Octagon for the post-fight festivities. Maybe Aldo wasn't a star in Brazil before UFC 142, but after treating the singing, chanting throng of fans to such a memorable ending on Sunday morning in Rio, you've got to think he's improved his standing in his home country. Clearly, Aldo is a man worth knowing. What's less clear is how the UFC is going to keep digging up interesting new challengers for a champ this dominant.

Biggest Loser: Anthony Johnson
It's not just that he missed weight (again), or that he quickly ran out of gas and got submitted (thanks to a little help from some quick, though not egregious stand-ups by referee Dan Miragliotta). It's also about his attitude. I understand that, on the eve of a fight, a fighter isn't eager to revel in his own failures and humble himself before fans and management. At the same time, c'mon son, Anthony Johnson. How are you going to come in waaaay overweight for your first fight at middleweight, then get on Facebook and brag that you don't care what anybody thinks about it? Who thought that was a good idea? Even at the weigh-ins, where Belfort showed up looking like a man who had done his share of suffering, Johnson was smiling and waving, apparently oblivious to the fact that his UFC career was now in jeopardy. I understand the desire to stay positive, but at some point you have to admit to yourself that you've screwed up. If you don't, how are you ever going to stop screwing up? How are you going to take responsibility for the mistakes you are habitually making, so that you can stop making them in the future? Clearly, Johnson hasn't figured that part out yet. Until he does, the UFC is no place for him.

Best Response to a Bad Situation: Erick Silva
I'd like to think that I would have handled that disqualification loss with as much class and grace as Silva did, but I know it isn't true. I know that because I was once disqualified from a beer pong tournament at a bar in New Jersey for some perceived violation of etiquette, and, well, let's just say that because of my response to the DQ I'm no longer welcome in that establishment. The point is, Silva had every reason to be upset. We've seen many fighters get away with far more egregious strikes to the back of the head. He might have thrown one or two hammerfists that drifted into illegal territory, but they clearly weren't intentional and weren't responsible for ending the fight. I don't know if Carlo Prater talked referee Mario Yamasaki into believing otherwise or if Yamasaki still has residual back-of-the-head guilt from the Belfort-Akiyama fight. Regardless, he got it wrong and Silva got cheated out of a win as a result. That Silva took the news so well is a credit to his character. I know I wouldn't have been so nice about it.

Chuck Norris Award for Kicking Excellence: Edson Barboza
His spinning wheel kick knockout of Terry Etim was so fantastically flashy that I keep expecting Steven Seagal to somehow claim credit for it. It's the kind of kick that makes every martial arts nerd instantly geek out, and yet it's also a kick that, according to the most ardent Taekwondo supporter I know, "even Taekwondo guys admit will almost never work." Somehow Barboza made it work, and for that he was handsomely rewarded with a $65,000 Knockout of the Night bonus. To even have the confidence to try something like that against a fighter of Terry Etim's caliber is impressive. To pull it off in such effective fashion is damn near amazing. Barboza will be seeing that moment of his life replayed in highlight reels for years to come. Unfortunately, so will Etim.

Worst One-Trick Pony: Chad Mendes
He had to know he was in trouble when Aldo easily shrugged off his first few takedown attempts. He kept after it because, hey, what else was he going to do? It's not like Mendes was going to outstrike Aldo, and he knew it. His only hope was to get the takedown and grind away, which put him in a very vulnerable position. The problem with putting too much stock into your own wrestling ability is that your opponent usually knows where your head is going to be. Even with his back to Mendes as he broke his grip, Aldo knew the challenger would come diving in for his legs at the end of the round, and that allowed him to spin and throw the knee with confidence. It may have been Mendes' inability to get that takedown that got him in trouble, but it was his own predictability that sealed his fate.

Best One-Trick Pony: Rousimar Palhares
You know how you can tell when someone is very, very good at what they do? They keep doing it to people who know it's coming. Mike Massenzio had months to prepare for Palhares' leg locks, and he still got heel-hooked in the first minute of the fight. That's the fifth submission victory of Palhares' UFC career, and four of those were leg and/or foot-based submissions. I still doubt that you can heel hook your way to a title in today's UFC, especially when the middleweight champ is a man who does so many things so very well, but who knows? Maybe if Palhares can get Ryo Chonan to show him that unique method of entry, he could shock the world.

Most Awkward Moment: Joe Rogan's Interrogation of Mario Yamasaki
Give credit to Rogan for taking us right to the source and getting Yamasaki's explanation for why he disqualified Erick Silva, but that's where it should have stopped. It's perfectly fair for a commentator to ask the ref to explain himself after a controversial call, but trying to cajole him into admitting he made the wrong decision just minutes after he made it is perhaps not terribly helpful. Rogan clearly had his opinion on Yamasaki's call, and it's an opinion I agreed with. Even so, that doesn't mean I want to watch him trying to talk Yamasaki into it on live TV. Not only is it uncomfortable to watch, it serves no purpose. Rogan normally does an excellent job of bringing clarity to the chaos in moments like those, but that's a time when he needs to content himself with getting the opinions of others rather than forcefully applying his own.

What MMA Needs Most: Rules Clarity
If you inadvertently hit an opponent on the back of the head during a frantic punch flurry, as Erick Silva did, maybe nothing will happen. Or maybe you'll get a warning. Maybe you'll lose a point. Maybe you'll even be disqualified. There's really no telling. The same holds true when you grab the fence to avoid a takedown, as Jose Aldo blatantly did just moments before knocking out Chad Mendes. That's cheating, and there's never anything inadvertent about it, and yet Aldo suffered absolutely no consequences for the illegal advantage he obtained. So why wouldn't he do it? With the fence grab, fighters know they'll almost never be punished the first time they do it. At most, they'll get a verbal warning, which essentially means that they can cheat at least once with no consequences whatsoever. If you chose your cheating moment wisely, as Aldo did, it can change the complexion of the fight in minor or major ways [ed. note: for more on that, I recommend reading Chad Dundas' explanation of why you should always cheat in an MMA fight]. How can this be? How can something that is clearly illegal and never accidental go completely unpunished? I don't doubt that refereeing an MMA bout is a difficult, stressful job, but it seems as though we only make it more difficult and stressful by leaving so much to the individual referee's discretion. Figuring out how the ref is going to respond to an illegal blow or a quick grab of the fence is like figuring out where an umpire's strike zone is. The difference is, if your opponent knows when and how to game that system, you don't get another at bat in MMA. The fight's over, you're out a bunch of money, and there's no guarantee that you can even bring these lessons into your next fight, since the next ref might interpret the rules differently. At the risk of handcuffing referees, MMA needs more clarity on what offense constitutes which punishment. Currently, fighters don't know what will happen to them until it's already happened -- or hasn't. The whole point of having "unified" rules is so they're the same everywhere. But as long as referees are allowed to enforce their own take on where the back of the head begins and what an illegal fence grab is worth, it's always going to be a shifting landscape from one fight to the next.