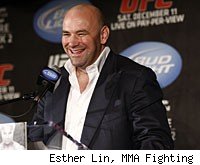 UFC President Dana White promised before ESPN's Outside the Lines reported on fighter pay that the UFC would release a video of Lorenzo Fertitta's full, uncut interview with ESPN. But what the UFC actually posted online on Monday was something more than that -- it was a full-on rebuttal of the Outside the Lines report that featured not only Fertitta's comments but also comments from White and some of the UFC's fighters.

White introduced the UFC's video by referring to the Outside the Lines report as a "piece of trash" and "one-sided." And while Outside the Lines is generally well-respected for producing high-quality sports journalism, White also said he doesn't respect the kind of journalism that ESPN does.

"They're dirty, they lie, and they never really give you all the facts," White said.

The UFC's response makes the case that the pay scale in the UFC is better than the ESPN report would have had viewers believe, noting that many UFC fighters have become rich for what they did inside the Octagon. However, the Outside the Lines report didn't dispute that -- Outside the Lines acknowledged that the UFC's best draws are doing well financially. Outside the Lines was more concerned with how much the entry-level fighters are making.

Where the UFC's rebuttal report is lacking is in offering any specifics about how much money the low-tiered fighters are making. Fighters like Chuck Liddell, Forrest Griffin and Matt Serra are featured saying they're satisfied with their pay, but those three guys are popular former champions. There still isn't a lot of information available about how much entry-level fighters are making. Fertitta says specific payroll numbers are not something the UFC is interested in revealing.

"We're not hiding anything from anybody, it's just that we don't publish it for everybody to see," Fertitta says. "We're not a public company. There's no reason for us to do that."

The strongest part of the UFC's response comes at the very end, where Ken Shamrock is shown after his final UFC fight talking about how much money he made in the UFC. Shamrock was featured on ESPN talking about how fighters don't get paid enough by the UFC, so that quote from Shamrock is a strong rebuttal.

The UFC has also chosen not to release information about how much fighters are making from sources like sponsorships and pay-per-view bonuses. For some fighters, those sources of income represent more than what they make in their purses. But we don't know for sure which fighters are getting those kinds of bonuses because the UFC has chosen to keep that information private.

Ultimately, Outside the Lines and the ESPN response offered two sides of a story. And neither side has told the whole story.

UPDATE: Later on Monday the UFC posted the entire 47-minute interview with Fertitta on YouTube. That video is below.