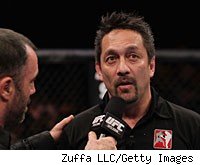 In the first week of the 2010 NFL season, Detroit Lions receiver Calvin Johnson caught what appeared to be a game winning touchdown pass, only to have a referee overturn the call on an obscure, ill-defined rule about what actually constitutes a catch -- a rule that has come to be known as the Calvin Johnson rule by fans who still have a hard time understanding why Johnson's apparent catch was not a catch.

Few things bother NFL fans more than the way the NFL's complex rules -- and the referees' enforcement of those rules -- detract from an otherwise thriving sport. The same could be said for MMA, where the UFC and the state athletic commissions have worked together to codify a unified set of rules -- only to find time after time that those rules aren't as clear as they should be, and that referees don't enforce the rules uniformly.

UFC President Dana White wrote on Twitter immediately afterward that disqualifying Silva was a "BS call," and he was right: Silva deserved to win. The UFC needs to work with the athletic commissions to more clearly define the rules, and to recruit and train better referees to enforce those rules.

UFC announcer Joe Rogan clearly was buying into the "mohawk" definition, and he went off on Yamasaki during an awkward post-fight interview in which Yamasaki clearly wasn't prepared to defend his decision. Yamasaki didn't inspire a lot of confidence by his inability to defend his decision, but in fairness to Yamasaki, referees aren't generally put on the spot the way Rogan put him on the spot, so it's not surprising that Yamasaki was caught off guard.

Even if you think SIlva did commit a foul by hitting Prater in the "earmuffs" area, Yamasaki didn't handle it the right way. If Silva committed an illegal strike, Yamasaki should have stepped in and taken a point away from Silva, and only stopped the fight after having the doctor check on Prater and determine whether Prater could continue. Instead, Yamasaki stepped in and waved his arms to stop the fight instantly.

A disqualification for an illegal strike should only take place if the illegal strike is what caused the fight to end. But it appeared that Silva's legal strikes -- a brutal knee to the body and several powerful hammer fists to the side of the head -- were enough to finish Prater off. Prater suggested after the fight that it was really the knee that did him in.

It's frustrating for fans -- and could be dangerous for fighters -- to see how inconsistent referees are about enforcing the rule against hitting opponents in the back of the head. For high-profile examples of much more severe strikes to the back of the head that the referees let go, watch Vitor Belfort's victory over Rich Franklin or Shane Carwin's win over Frank Mir. In those fights, the victors landed much harder strikes to the back of the loser's head, and the referees let those strikes go. Consistency is needed in refereeing of any sport, and it's seriously lacking in MMA.

UFC 142 Notes
-- Gabriel Gonzaga landed only four strikes in his win over Ednaldo Oliveira, according to CompuStrike. But Gonzaga successfully completed both of his takedown attempts, achieved two dominant positions on the ground, and sunk in a rear-naked choke to end it. Gonzaga said, "I'm back," afterward, but that remains to be seen -- beating Oliveira doesn't prove that Gonzaga is back to his previous form as one of the elite heavyweights in the world. But there's no question that a fighter with Gonzaga's Brazilian jiu jitsu skills can make short work of a guy with a rudimentary ground game like Oliveira.

-- Vitor Belfort finished Anthony Johnson off in the first round, a day after Johnson came in overweight by 11 pounds, and UFC President Dana White said afterward that he plans to cut Johnson. It's a shame that a fighter as talented as Johnson is losing his job, but if you can't make weight, you can't fight. And Johnson has repeatedly failed to make weight.

UFC 142 Quotes
-- "This was my first fight without Shawn. It was definitely an adjustment not having him in my corner. I hope Shawn would be proud."--Sam Stout, losing a tough decision in the first fight since his coach, friend and brother-in-law Shawn Tompkins died.

-- "I went out there and proved to the people of Brazil that I belong in the Octagon. He was a very tough opponent. I had a tough camp and battled some injuries, but I was able to get in there tonight and control the striking and win."--Felipe Arantes, who put on a good showing in his victory over Antonio Carvalho and appeared ecstatic to win in front of his fans back home in Brazil.

-- "This was like the World Cup for me tonight. To fight against a veteran like him was a true honor. I hope this win proved to the UFC that I'm ready for the main card. I felt like a complete fighter in there tonight."--Yuri Alcantara, using a soccer analogy to describe the feeling of beating Michihiro Omigawa at home in Brazil.

Good Call
-- When the first fight went to the judges' scorecards, it was a relief to hear all three judges get it right -- 29-28 for Felipe Arantes over Antonio Carvalho. Arantes clearly took the second and third rounds and deserved to win the fight, and it was also good to see that the judges didn't favor the Brazilian in the first round, as the Canadian Carvalho got off to a good start and deserved to win the first.

Stock Up
Edson Barboza is now 10-0 in his MMA career after an incredible knockout kick of Terry Etim. We already knew Barboza was one of the most explosive strikers in the lightweight division, but no one could have predicted that he'd produce one of the all-time great knockouts against a good opponent like Etim. Barboza might struggle against some of the lightweight division's top wrestlers, but as a striker he's just about as good as it gets at 155 pounds.

Stock Down
Michihiro Omigawa has now lost three of his four fights since returning to the UFC early last year, after getting thoroughly dominated by Yuri Alcantara. Omigawa went on a tear in Japan in 2009 and 2010 and looked like one of the best featherweights in the world, but in the Octagon he simply hasn't been able to get the job done. He might be finished in the UFC.

Fight I Want To See Next
Jose Aldo put on such a show against Chad Mendes that I just don't see any challenges emerging for him in the featherweight division. The fight I want to see next is Aldo vs. Frankie Edgar. If Edgar beats Ben Henderson next month, I'd love to see both Aldo and Edgar keep their titles and meet at a catchweight of 150 pounds for a champion vs. champion superfight.