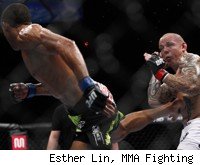 Brazilian lightweight Edson Barboza outdid himself Saturday at UFC 142 in Brazil, not only claiming his third straight Fight of the Night, but also the Knockout of the Night honor as well.

Barboza and Terry Etim shared the Fight of the Night honor for their pay-per-view opener, the only fight on the main card to go past the first round. And Barboza's spectacular finish set the tone for what turned out to be a wild night of fights.

After controlling most of the fight with leg kicks, Barboza landed a wheel kick to knock Etim out cold at two minutes and two seconds of the third round. In executing the first wheel kick knockout in the UFC, Barboza won his fourth straight UFC fight and advanced his MMA record to 10-0 overall.

For Submission of the Night, Rousimar Palhares made another bid towards becoming the most dangerous leglock specialist in the UFC, needing just 63 seconds to force Mike Massenzio to submit. The heel hook was Palhares' third in the UFC and his fourth leglock finish in the UFC.