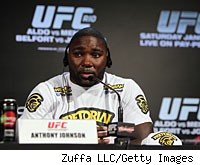 The look on Vitor Belfort's face in Dana White's pre-fight video blog said it all. When the UFC president sat him down before the UFC 142 weigh-ins and explained that Anthony Johnson wouldn't make weight -- that, in fact, he wouldn't even come close to making weight -- you could see that last ounce of energy drain from the Brazilian's face.

Here he was chewing on ice through a towel, feeling miserable but on target to make weight, while Johnson was full of fluids and closer to 200 pounds than 185. Not only was it unfair, it was unprofessional. It was also unwise, at least for Johnson's career prospects, and it was completely avoidable.

As we've learned over the years, one of the quickest ways to enrage your boss in the UFC is to miss weight. If you miss it by a pound or two it's bad enough. If you miss it by a bowling ball, as Johnson did after being forced to rehydrate by the UFC doctors -- and if it's not your first offense -- then you're really in trouble. As in, the kind of trouble that results in unemployment.

White first said the UFC was "probably going to cut" Johnson after his sorry showing on the scales and in the cage this weekend, and according to an MMA Junkie report, the cut is already a reality. Normally, a submission loss to Belfort and a 2-2 record in your last four UFC fights wouldn't be cause for termination. But when you factor in Johnson's recent track record you start to understand why the UFC might have come to the conclusion that he isn't worth the headache.

This is a guy who went up a weight class because he kept missing weight, and then missed weight for his first fight in his new division. This is a guy who put his own health in danger to the point where UFC doctors stepped in. Should the bout have even taken place? Would it have been allowed to, had an actual athletic commission been overseeing things? Should fans have asked for their money back after a depleted, diminished Johnson crumbled in the cage? All valid questions that Johnson invited, simply because he couldn't do what every other fighter on the card had done.

Maybe the worst part is his own flippant attitude about the whole thing, as if he was doing us a favor by even trying to make the contracted weight.

"I'm already laughing at what ppl are saying," Johnson wrote on Facebook after coming in at 197 pounds for a 185-pound bout. "Yeah it was for medical reason and I did what the UFC Dr Told me to do. Believe it or don't I give a f**k cuz the ppl close to me were freaking out but I'm still alive and something like this has never happen before. Say what you want I'm still gonna do my thang. You try not having feeling in your legs and can't move then and see how you look at life after that."

Of course, when Johnson wrote that "something like this has never happen [sic] before," I assume he meant 'at this weight class,' or maybe just 'on this continent.' Failing to make weight? Yeah, that's happened to him before. A few times, in fact. That's why everyone around him thought it was such a good idea for him to move up to middleweight. He'd been killing himself trying to make the welterweight limit, and he wasn't even succeeding at it reliably enough for it to seem worth it.

As for the whole "medical reasons" excuse, let's put that in perspective. When your body shuts down in the middle of a rough weight cut, sure, that's a medical problem. Then again, it's also a self-induced medical problem. His explanation is appropriately vague so as to keep us from knowing all the details, but it's not like a congenital heart defect kept Johnson from making the weight. Johnson had medical problems the same way a compulsive gambler has financial problems.

This wasn't a lightning bolt of bad luck that found its way across the universe and zapped Johnson right in the teeth. This was a consequence of his own choices and his own actions, and it's a mistake he's made enough times to know better by now. The fact that he would attempt to write it off as a medical issue and blame the doctors just tells us how he got in this situation in the first place: by failing to take responsibility for his own actions.

Of all the red flags that Johnson waved this weekend, that might be the most alarming one. If he at least showed a little remorse, a little humility and contrition, maybe it would be different. Instead he acted as if the whole world was insane for being angry at him, as if he had no control over what had happened. If that wasn't unprofessional enough to doom him, then he went out and fought like a man who had left his best stuff in the sauna, just to make White's decision easier.

It'd be one thing if Johnson had taken the fight on short notice. If, like Mike Pyle did when he got an offer he couldn't refuse at UFC 98, he made himself sick in an effort to seize a fleeting opportunity, we could at least sympathize with him.

But Johnson knew for weeks that he'd need to weigh 186 pounds on Friday afternoon. He simply failed to do what was necessary to get there. He failed to conduct himself like a professional, either before the weigh-in or after.

And if a guy has shown that he isn't capable of behaving like a professional, maybe he shouldn't be one, at least at this level. Maybe he should leave this to the people who care enough to do what they say they'll do, and take responsibility for their mistakes when they come up short. Maybe the choice isn't his to make anymore for a very good reason, and maybe it's about time.