What's It Like to Be a Foreigner Fighting in Brazil? Ask the Guys Who've Done It 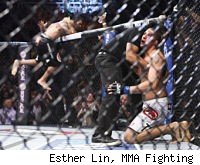 UFC welterweight David Mitchell got his first hint that fighting in Brazil would be a little different than your average Las Vegas fight night when he was in the airport on his way down to Rio de Janeiro. While waiting for his flight, he got to talking to a Brazilian traveler about his role in the UFC's first event in Brazil in over a decade, and he casually mentioned that he was slated to fight Paulo Thiago -- an accomplished, but far from famous welterweight, by North American standards.

"He told me that Paulo had just done a big movie or something," Mitchell recalled. "I thought, okay, whatever."

The movie, Tropa de Elite, was actually a wildly popular Brazilian film about the BOPE -- an elite police unit that Thiago serves in. It was also the source of Thiago's entrance music when he and Mitchell squared off at the HSBC Arena in Rio that Saturday night, and the response from the crowd was enough to jar Mitchell out of his pre-fight game face, if only for a moment.

"I think he got the biggest response from the crowd of anybody," Mitchell said of Thiago. "I didn't expect him to be so popular. It was just an electric environment. When I walked out to go fight, it was just 15,000 Brazilians spitting snake venom at me."

For foreign fighters -- but especially Americans going up against Brazilians -- it's a unique fight night environment, and one that not all fighters are fully prepared for when they arrive.

"Some guy just told me I was going to die," Forrest Griffin said moments after arriving at the open workouts on Rio's famed Cobacabana Beach. "But he said it in very poor English, so I was able to ignore him."

'Hostile' is one word to describe the environment for visiting fighters. All week long, at press events and weigh-ins, they were greeted by gleeful chants of 'Vai morrer!' You're going to die. Granted, it seemed good-natured and not at all intended literally by most fans, but as some fighters admitted later, it was a little unsettling the first time they heard the translation.

Unlike in the U.S., where fans might start up the occasional 'USA' chant but generally spread their loyalties out according to their own individual whims, the Brazilian fans tend to be both exuberant and unanimous in support of their countrymen.

"They're so passionate," said UFC lightweight Spencer Fisher, who faced Brazilian Thiago Tavares at UFC 134. "The Americans, it seems like they're always for whoever wins. If a guy's losing they don't like him, but if he comes back they'll switch sides. But in Brazil, they're country strong and they're loyal."

Fisher, too, was met with a partisan crowd when he walked to the cage -- and like Mitchell, he also ended up on the losing end that night. But also like Mitchell, Fisher insisted that the hostile environment didn't affect his performance in the cage.

"I remember Jose Aldo saying once about the Americans, 'They can scream all they want to, because I don't understand what they're saying.' I kind of felt the same way."

If anything, the enthusiastic reception -- whether negative or positive -- actually helped fighters like Mitchell, who came into the bout struggling with a neck injury that required a cortisone shot just to get him into the cage, he said.

"Honestly, after everything I'd been through, dealing with injuries and a real difficult training camp, it was like I had to go fight this guy in his hometown or I was going to get cut. After all that, the crowd, if anything, was a positive," said Mitchell. "It was a charged atmosphere, like a World Cup game or something."

That's something that Anthony Johnson's coach, Mike Van Arsdale, is planning on when it's his fighter's turn to take on Vitor Belfort at UFC 142.

"Anything like that, whether they want him to win or don't want him to win, he feeds off that. It's like Rashad Evans, everywhere he goes they boo him. It makes him fight better. I hope they don't cheer for Rashad ever. I really do."

For American heavyweight Brendan Schaub, who took on Brazilian MMA legend Antonio Rodrigo Nogueira on the card, it helped that he'd had a chance to come down a couple months before the bout for an early press conference. He even paid for an extended stay out of his own pocket to do some training and visit the favelas as part of a community outreach program, which made him a little more comfortable when he returned for the fight, he said.

"It was definitely hostile once the fight got going, but one thing I did right was getting down there and embracing the culture and giving back to the community. I think that went a long ways."

Of course, Schaub, Fisher, and Mitchell all lost that night, as did most foreigners on the card. Of the eight fights that pitted a Brazilian against an outsider, only one -- Stanislav Nedkov's TKO of Luiz Cane -- didn't go the way the crowd wanted it to. It's one thing for fighters to say the environment didn't play a factor, but it clearly didn't help much either.

And yet, the fighters said, once their bouts were over it was as if all the vitriol vanished immediately. They were no longer the enemy. Suddenly they were beloved former foes, and were embraced with the same energy that had gone into despising them moments before.

"When I came out they were booing me, hating me, but I think I earned their respect," said Mitchell. "When I walked back people were cheering for me and hugging me. This little kid wanted my hat, so I gave it to him. I ended up just kind of cruising around and meeting people. I met the mayor of Rio. It was really cool."

Even Schaub, who suffered a heartbreaking knockout loss, managed to make the most of the sun, sand, and surf once the fight was over.

"Obviously, I planned on it going a different way, so it wasn't the best time," he said. "Still, it's never a bad time when you're on the beach in Brazil."

For Fisher, the post-fight experience ended up being even worse than fight itself. While playing pool volleyball with "Shogun" Rua the next day, he said, he felt as if he'd gotten water in his eye. The sensation didn't go away all day, and continued even when he returned to the U.S.

"It just kept getting worse and worse," he said. "I was like, man, how can I still have water in my eye? Then we started boxing and right away I could tell it was something else. That's when I realized my retina was detached."

Five months later, Fisher still doesn't have full vision back in his eye. His doctors tell him it was likely a mix of accumulated damage and blows he took in the fight that night in Rio, and his peripheral vision still hasn't returned.