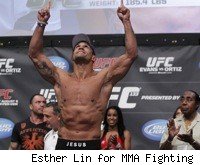 So just how much of a size advantage will Anthony Johnson have over Vitor Belfort Saturday night at UFC 142?

Well, we already know that "Rumble" weighed 204.2 pounds this morning, hours after missing the middleweight mark Friday afternoon when he weighed 197 at the weigh-ins. Belfort's highly-regarded nutritionist and trainer Mike Dolce told MMAFighting.com Saturday morning from Brazil that Belfort weighed 205 pounds at 9:15 p.m. local time Friday night, and he believes "The Phenom" will be around that weight by the time he steps into the cage Saturday night.

Dolce said he believes Johnson will "probably be over 220 pounds" come fight time, but despite the expected weight discrepancy, Belfort never considered turning down the fight.

"We wanted the fight regardless," Dolce said.

According to Johnson's manager Glenn Robinson, "Rumble" was en route to making weight until he fell ill Friday morning and needed fluids to get better. However, Dolce isn't buying that excuse.

"Every fighter is 'ill' on weigh-in day. He was bouncing around giving high-five's in the pre-weigh-in line-up, laughing and looking fine," Dolce said. "Missing weight is an issue of a weak mind, not body. I have seen thousands of cuts. If an athlete misses it is because he did not prepare properly or he breaks mentally."

And while the scales will show that Johnson will enter the cage with a size advantage, Dolce doesn't believe the deck has been stacked against his client Belfort.

"Belfort had the advantage the day the fight was signed. Johnson endured no more trauma than Vitor did. Or, any other MMA athlete. I don't care what the stories say, all these guys suffer exactly the same and endure the same pain. Either you are prepared or you aren't. Vitor is prepared."