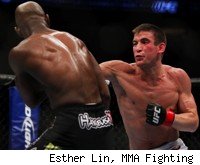 This is the UFC 142 undercard live blog for all the preliminary bouts in support of tonight's UFC pay-per-view from the HSBC Arena in Rio de Janeiro, Brazil.

Stout vs. Tavares, Gonzaga vs. Oliveira, Alcantara vs. Omigawa and Funch vs. Pyle will be televised on FX. Arantes vs. Carvalho will be streamed on Facebook.

Mario Yamasaki is the referee.

Round 1: Tavares punches into clinch and scores the early takedown. Stout tries to use the cage to stand up and Tavares almost climbs his back. Stout escapes and Tavares immediately shoots, but this time Stout defends. Tavares scores his second takedown with 3:09 remaining in the round. Stout gets back to his feet, but Tavares keeps the body lock and uses it to slam him back down. Stout stands up and Tavares tries for a guillotine right away and drops down for it. Stout quickly escapes and ends up taking top position. Tavares looks for a leglock and Stout steps away. Stout lands a nice right punch. Stout connects to the body and Tavares clinches. Stout shrugs him off and they're back into what has mostly been a kickboxing fight. Tavares glances a straight right of his own. MMA Fighting scores the round 10-9 for Tavares.

Round 3: Early on, Tavares is caught with a low blow and takes his time to recover. With the fight restarted, Tavares fires off kicks while Stout looks to open up his hands. Tavares tries to a takedown, but Stout shrugs him off. Stout stalks Tavares. Tavares shoots and Stout again successfully defends. Tavares connects on another leg kick. Tavares lands a kick to the body and Stout returns fire with a right hand. Stout lands two consecutive jabs. Tavares bleeds from his nose. With the fight coming to an end, Stout lands the biggest shot of the night to stun Tavares and put him on one knee. Close round until then and Stout might have just stolen the round. MMA Fighting scores the round 10-9 for Stout and the fight 29-28 for Stout.

All judges see it differently ... Not a robbery by any means. Close fight.

As Junior dos Santos' sparring partner, there's a bit of buzz surrounding Oliveira as he heads into his UFC debut here. Let's see if he's worthy of the hype. Dan Miragliotta is the referee.

Round 1: There's a long feeling out process. Just under two minutes into the fight, Gonzaga shoots and scores the big takedown. Oliveira recovers to his feet only to get tripped back down and into his halfguard. Oliveira again tries to stand, but Gonzaga wraps a choke around his neck. Gonzaga flattens Oliveira and Oliveira taps.

"It felt great to be back in the Octagon," Gonzaga said. "I showed that I still have my BJJ skills in there tonight. My time away from the UFC was good for me. I dealt with some personal business in my life and came back refocused. Before, I was training well, but my mind just wasn't in it. Now, I'm back, I feel great. I'm focused and I showed that by beating a 13-0 fighter."

Round 1: Alcantara quickly throws a knee after a glove tap that bothers Omigawa. Alcantara looks sharp on his feet and I think a knockout is only imminent if Omigawa decides to stand with him. Alcantara lands a straight left. Omigawa sneaks a left hand. Alcantara lands with a straight left. Omigawa takes a unorthodox approach in his standup, constantly changing stances and levels. Alcantara again finds a home with his left hand. Alcantara lands to the body. A spinning backfist connects with an elbow. Omigawa is stunned. Alcantara takes his back and lands punches. Omigawa stands (with Alcantara on his back) and is able to turn into Alcantara. Omigawa lands short elbows and passes to Alcantara's half guard. Alcantara escapes back to full guard. Alcantara secures an armbar and Omigawa's left arm is bent... The round ends. Replays show that Omigawa didn't tap, but he is sure lucky the bell sounded. MMA Fighting scores the round 10-9 for Alcantara. Dominant first round, almost a 10-8.

Round 2: Omigawa throws with his left hand, so it seems his left arm is okay after the nasty-looking armbar. Alcantara drops Omigawa. Alcantara takes full mount and then Omigawa's back. Alcantara punches with left hands to try to set up the rear-naked. Alcantara looks like he gets his arm under Omigawa's chin, but only briefly. Omigawa escapes to halfguard and then full guard. Omigawa's left ear is busted open. Omigawa looks for a straight armlock. Alcantara patiently works to score points. Another dominant round for Alcantara. MMA Fighting scores the round 10-9 for Alcantara.

Round 3: Alcantara's pace has slowed. Omigawa is gamer. After getting arm bent and dropped twice, he's still firing away. However, he's not really taking advantage of Alcantara slowing down. Alcantara continues to give Omigawa problems with his straight left. Omigawa stays in the pocket. Omigawa lands two rights on a gassed Alcantara and then scores a takedown. Omigawa tries to score points inside the guard of Alcantara. The referee stands them up with 10 seconds left. Omigawa tries a judo throw but Alcantara lands in full mount. MMA Fighting scores the round 10-9 for Omigawa and the fight 29-28 for Alcantara.

Alcantara looked really good in the first two rounds, though he might have outworked himself and basically cruised in the final round.

"This was like the World Cup for me tonight," Alcantara said. "To fight against a veteran like him was a true honor. I hope this win proved to the UFC that I'm ready for the main card. I felt like a complete fighter in there tonight."

Omigawa was immediately taken to the hospital following the fight.

This welterweight bout kicks off the UFC's live prelim debut on FX. Mario Yamasaki is the referee.

Round 1: They feel each other out. Funch favors throwing hands. Pyle lands a number of leg kicks. Pyle cracks the Brazilian-born Funch with a straight right. With Funch stunned, Pyle floors Funch with a knee. Pyle finishes with punches.

In the post-fight interview, Pyle is ecstatic and tries to win back the crowd by yelling that he loves Brazil. The Brazilians won't hear it though, and the boos grow louder. Pyle ends the interview by asking Joe Rogan to put him on Fear Factor.

"I'm disappointed," Funch later commented. "I don't have any excuses. He caught me with a good shot and it was over."

The bearded Canadian Carvalho is the first man to make his entrance at UFC 142 and he's immediately greeted with boos. Arantes with his trademark cowboy hat enters to cheers. Leon Roberts is the referee.

Round 1: Quick exchange of punches to start. Carvalho throws high kick and Arantes falls to his back. Carvalho passes to side. Arantes tries to escape but Carvalho slickly takes Arantes' back. Arantes frees himself to his feet and Carvalho grabs the front headlock. Arantes digs for the shot, but Carvalho stops it and claims full mount. Carvalho rains down punches and Arantes escapes to bring the fight to standing. Arantes stays active with kicks. Arantes looks better on the feet than Carvalho. Carvalho does have a high kick he likes to throw that is keeping Arantes thinking. Arantes attempts a jumping knee but Carvalho catches a leg and tries for the takedown. Arantes stays balanced and frees his leg. Carvalho lands a body kick and the round ends. MMA Fighting scores the round 10-9 for Carvalho.

Round 2: Arantes and Carvalho kickbox with Arantes taking the edge. Carvalho lands a nice punch to the body. Arantes attempts a jumping kick that is blocked, but the crowd loves it. Arantes closes in but neither man is able to do much in clinch and they separate. Arantes starts to find his mark, landing a number of punches. Arantes controls the rest of the round standing. MMA Fighting scores the round 10-9 for Arantes.

Round 3: Light on his feet, Arantes continues to work a variety of kicks. Carvalho answers back and connects with leg kicks. Carvalho shoots for a takedown but Arantes stuffs it turns Carvalho on his back (Carvalho might have pulled guard). Carvalho works his rubberguard, but eventually switches back to closed guard. Arantes lands elbows and the energetic Brazilian crowd roars. Carvalho is cut. More Arantes elbows. Carvalho eyes mission control again, but he's having difficulty making anything happen. Arantes briefly passes, but Carvalho escapes and they're back on their feet. Nice right hand by Arantes. MMA Fighting scores the third round 10-9 and the fight 29-28 in favor of the 23-year-old Arantes.

Carvalho was never in danger, but Arantes should take the decision by outlanding Carvalho in the last two rounds.