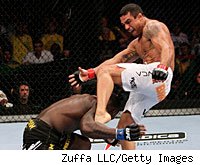 One of the most popular Brazilian fighters in the UFC put on a show back home on Saturday night.

Vitor Belfort, who has been with the UFC longer than any active fighter and is a star in his homeland, fought in Brazil for the first time since 1998 and pulled off a first-round submission victory over Anthony Johnson at UFC 142.

In the early going Johnson appeared to have Belfort in trouble, but Belfort maintained his composure, got the fight to the ground and steadily transitioned into a dominant position, taking Johnson's back on the ground. Belfort sunk in a rear-naked choke and Johnson tapped out with just 11 seconds left in the first round.

"A loss is a loss. My legs just got really tired," Johnson said after the fight. "I didn't get beat up in there and he really didn't hurt me with what he hit me with. I just got tired. I've got to figure this thing out."

The fight was marked by controversy beforehand, as Johnson failed to make weight, and there may be more controversy following the fight because referee Dan Miragliotta stood the fighters up twice in the first round for questionable reasons.

"He kept trying to take me down and I kept fighting it. 'Make him quit.' That was my goal and I did just that," Belfort said of Johnson. "I had the whole country (of Brazil) behind me and I could feel it in there tonight. Next to God and my family, my fans are one of the most important things to me. Rio, America, all over....I love my fans."

But there's no controversy about this: Belfort put on a tremendous performance. Up next for Belfort is a stint coaching on the upcoming Brazilian season of The Ultimate Fighter, where his opposing coach will be Wanderlei Silva. Belfort will then fight Silva at the end of the season.

If Belfort looks as good against Silva as he did against Johnson, that's going to be a rough fight for Silva. Belfort is looking good.