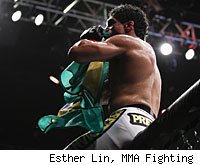 The win improves Tavares's MMA record to 17-4-1. Stout, who was fighting for the first time since the death of his coach, close friend and brother-in-law Shawn Tompkins, suffers a tough loss and falls to 17-7-1.

"Sam Stout was the toughest opponent I've ever faced and this is the biggest win of my career. I thought about this fight for a long time," Tavares said afterward. "I have to be honest: of all the ways I saw this fight going, I never expected to beat him striking. I tried to take the fight to the ground, but he has great takedown defense. The fight stayed on the feet and I was able to win there. I want another big name next."

Early in the first round Tavares made it obvious that his game plan was to get the fight to the ground, and he generally executed that game plan effectively, clinching with Stout, slamming him down and briefly attempting a guillotine choke. But Stout did a nice job of getting out of the choke and into a dominant position before getting back to his feet and landing some good punches late in a close and fairly even first round.

In the second round it became much more Stout's kind of fight, as he kept it standing and began to land effectively, although Tavares also landed a kick that opened up a cut on the side of Stout's head. Each of the first two rounds was close enough that it was conceivable for the judges to score it either way.

Tavares seemed to be comfortable and in control for most of the third round, and it appeared that the fight was going his way. At the end of the round, however, Stout began to unload, landing some hard shots in the final 20 seconds of the round. Tavares appeared to be hurt as the fight came to a close, but Stout hadn't done quite enough, and Tavares escaped with a win.

"I thought I took rounds two and three, but I just struggled to find my rhythm," Stout said. "My head wasn't in it in the first round. I had a slow start and I have no one to blame but myself for that."